Aquarena Springs, in San Marcos, is no longer the commercial tourist attraction it once was, but at the soberer Aquarena Center, operated since 1996 by Texas State University, you can still, most days, pay the fare and walk the plank and skim the surface of Spring Lake in a glass-bottom boat. You should.

Spring Lake is the semi-artificial headwaters of the San Marcos River. The lake is fed by hundreds of artesian springs, drowned by a dam installed in 1854, bubbling up out of the Edwards Aquifer through porous limestone. Some of the bigger springs emerge in clouds of turbulence from fissures in the rock. Hundreds of little ones exhale tiny plumes through loose sand, tossing grains in their underwater wake. It’s a remarkable and unlikely thing to see, and over the years, hundreds of thousands of people have seen it.

The springs have averaged a flow of about 152 cubic feet of water per second, uninterruptedly, for as long as anyone can figure. Subterranean sandbars flooded when the springs were dammed have yielded signs of human presence dating as far back as 12,000 years—as old as any known inhabited locale in North America.

There’s rare Texas wild rice down there, and endangered fountain darters and blind salamanders. There are wary gar and soft-shell turtles and translucent little shrimp you’ll never see in the clarity. There are wire-gridded old archaeological digs and a big old pipe to nowhere and little anchored thermometers poised at the outflows by grad students. The water has been getting warmer recently, and nobody knows how that might skew the ecosystem if it keeps up. Generally it runs at 72 degrees Fahrenheit year-round.

The San Marcos, as far as anyone knows, has never stopped flowing.

For much of the latter half of the 1900s, Aquarena Springs featured a swimming pig, moonlighting students dressed as mermaids, an underwater theater, and a resort hotel on the shore. The story goes that Texas tourism was more or less invented there. I recently saw a picture of myself on the grounds as a 5-year-old child. I can’t dredge up a single memory of that day.

I went back in mid-December to take a better look. 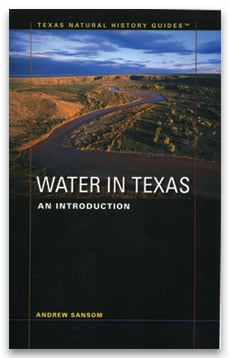 Since 1991 the real estate has been owned and managed, inciting varying degrees of local controversy, by Texas State. There’s a project to restore the lakeshore landscape to its pre-resort condition. There are others who’d like to see the little mill dam removed and Spring Lake drained to restore the natural fountain. Still others want the pig back.

The River Systems Institute is headed by Andy Sansom, well known as a former director (1990 to 2001) of the Texas Parks and Wildlife Department and a past president (1982 to 1987) of the Texas Nature Conservancy. Sansom is also the author of the recently published Water in Texas: An Introduction, part of University of Texas Press’ Texas Natural History Guides series.

It’s a small-format book, 7.5 by 5 inches, suitable for stashing in a backpack or a waterproof duffel and setting off downstream (though it won’t help you navigate), but just as useful as a desk reference, and like its series companion volumes on flowers, snakes and birds, it even has a centimeter scale printed inside the cover, though it’s unclear what for. 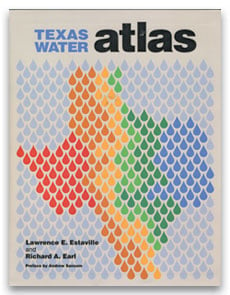 When I asked Sansom about his work, he invited me to San Marcos and arranged to take me out on Spring Lake.

We admired the lunker bass floating unperturbed beneath the glass. There are also tilapia down there, an introduced variety of cichlid that goes for $4.99 a pound farmed and filleted at H-E-B. The grad student piloting the boat wants to institute a spearfishing hunt to thin the tilapia out. They fight with the other fish and eat everything in sight.

Sansom wants to take the pipe to nowhere out, too. Nobody mentions the dam.

Imperfectly, but not implausibly, this spot of water and the river that spills from it represent most of what’s interesting about water in this state. Humans, among other species, rely on it. It has worked waterwheels, floated recreational paddlers, and anchored car-based tourism. It’s threatened by trash fish and recharge-zone pollution and development demands. It’s subject to warring interpretations about what best to do with it and how best to manage it. It’s been dammed and degraded and partially restored and, paradoxically, the preservation of what’s left of its natural state continues to require maintenance.

The San Marcos as it stands is a man-mangled—if not exactly man-made—river. In this way too the San Marcos is typical. Our rivers may not have always heeded our will, but they’ve certainly been subjected to it. And they’ll continue to be. The question is: for better, or for worse?

Water is a simple enough substance, but a hard subject to wrap a head around, and an encompassing field guide to water in all of its extant-in-Texas forms is an ingenious and overdue idea. Sansom’s book suggests the big picture through small-bore attention to its subject’s component parts.

We experience water as rain, as lakes (virtually all of which in Texas are dammed reservoirs), as gullies and bayous and cricks and creeks and streams and forks and rivers. There are wetlands on the coast and shallow playa lakes on the plains. There are bays. There’s the Gulf. Now connect all those dots and apply pressure from every side. Flood as necessary.

Mining sucks up huge amounts of water. Agricultural use, especially west of the aridity-defining 100th meridian, accounts for 60 percent of water use in Texas. Municipal demand, of the sort that flows through your faucets, increases predictably with population growth.

Most of us have been able to take water for granted for so long that we don’t have any coherent idea what it’s worth or where it comes from, as exemplified by our taste for bottled drinking water, which can cost thousands of times as much as tap water, from which it’s essentially indistinguishable.

But when Lance Armstrong makes hometown front-page news for the size of his water bill (as he did last summer) and the Rio Grande no longer reliably reaches the Gulf of Mexico, we can safely assume that such blissful ignorance is coming to an end. Water in Texas is a necessary primer for figuring out what to replace that ignorance with. Talking to Sansom and reading his book, three main issues emerge.

Texas’ population is supposed to double by 2035. Increased population = increased demand for water. Where is it going to come from?

2) Texas labors under a scientifically outdated system of laws that treats surface water one way and groundwater (i.e. underground water) another, even though it’s all the same water. There’s virtually no regulation of groundwater. You can pretty much take as much water out of the ground as you can pump. So can Ozarka, for that matter. Overpumping dries up neighboring wells and causes land to subside and drains aquifers faster than they can recharge.

3) Conservation, broadly defined, is paid for—if it’s going to be paid for at all—by hunters and fisherpersons and, sweetly enough, birders, all of whose activities rely on healthy aquatic environments. Tiny minorities of African-Americans and Hispanics hunt or fish (I haven’t seen their birding numbers). African-Americans and Hispanics combined is most of us, and growing. If someone doesn’t teach their kids to advocate for the natural world, then the natural world is kind of screwed, and water with it. It’s not in Water in Texas‘ field-guide nature to editorialize overmuch on solutions to these problems, but given the pressing need and the largely invisible political will to address them, the book sounds almost clarion in its communication of context. Sansom starts at the molecular level and expands from there, through descriptions of Texas’ major watersheds to the over-engineered Gulf shores, from the bureaucracy of regional water-planning groups and groundwater districts to a regulatory tangle of local, state and federal agencies, from the drought of record (the 1950s) to proposals for another 15 reservoirs around the state to desalination plant prospects to municipal wastewater reuse.

If Water in Texas isn’t designed to provide clear answers, it goes a long way towards clarifying the questions.

About the only thing it doesn’t tell you is where the fish are biting.

Interbasin water transfers are especially interesting, and there’s a big one likely to require legislative attention this session: a Lower Colorado River Authority plan to sell a bunch of lower Colorado River water to San Antonio. LCRA has rights to the water, but if it’s taken out and sent to San Antonio, that amount won’t be there when the river wends down closer to Wharton, where it’s relied on by rice farmers and the economies that rely on them.

And none of this even considers “environmental” flows: leaving enough water in the river that it looks and feels and sounds and acts like what we like to think of as a river, in part so that it can feed the estuary waters along Matagorda Bay, where we’ve only just begun to calculate the biological and human wealth that fresh water generates.

If there’s an ultimate takeaway from these two titles (notable in the Texas Water Atlas mostly by omission), it’s the undervalued importance of environmental flow. Environmental flow is something you can swim in, a place a kid can fish, a good place to spend a day in a canoe. Rivers may carry less than 3 percent of the world’s water at any given time, but to divert them dry would do more than create muddy low spots in the landscape for four-wheelers to tear up. It would interrupt the life cycle and kill the life source of far more than fountain darters.

Jacob’s Well—like San Marcos Spring, a “perpetual” artesian spring, which feeds Cypress Creek down the road in Wimberley—temporarily stopped flowing in the summer of 2000, and again last October. Jacob’s Well draws off the Trinity Aquifer, which abuts the Edwards, from which the San Marcos flows. Locals blamed too much pumping and too little rainfall.

The statewide forecast calls for more of all of that. Texas needs to plan for it. That means, sooner or later, legislators are going to have to take the lead. They could hardly do better than to start by taking a glass-bottom boat out on Spring Lake, and then reading these two books.