The lower southeastern corner of the Lone Star State stretches westward from the Louisiana boundary at the Sabine River, following the coastal bend in a swath over 100 miles wide and long, past Galveston. Among certain folks, this region is jokingly referred to as Louisiana Lapland—the place where a large piece of southern Louisiana seems to have lapped over into Texas. Today that portion of Interstate 10 that connects the Southeast Texas cities of Houston and Beaumont to the Louisiana cities of Lake Charles and Lafayette might also be proclaimed the zydeco corridor of the world.

No matter where you may have lived or traveled, or what your tastes in music might be, somewhere along the way you have likely encountered the uncanny sound of zydeco. For many people it is but a fleeting moment of exposure, leaving them slightly confused, but somehow enthused by their sudden, involuntary foot-tapping. For certain others it is an even more visceral awakening, the start of an ongoing relationship with a potent force. For some, there is no memory of their first encounter, for they have known it all their lives.

Arguably, the most crucial metropolis in the development of modern zydeco is Houston, where Creole immigrants and their 20th century descendants prominently fused the old French Louisiana folk music known as “la-la” with urban blues to create a new sound. Foremost in that sound is the accordion, a unique musical machine not widely featured, and sometimes derided, in mainstream American pop music. But in zydeco, the hand-operated, bellows-flexing wind instrument is essential. Moreover, its master players, who usually double as lead singers, are venerated. Whether they are pumping out a rapid two-step boogie or euphoniously easing through a slow-drag waltz, the men and women who wield the squeeze box are the kings and queens of this music.

In contrast to other accordion-based forms, zydeco requires that its dominant instrument be paired with the highly percussive rubboard vest (also known as the scrubboard and, in French, as le frottoir, from the verb frotter, “to rub”). Unlike the handheld washboard once common in jug bands and such, this device is not a household utensil, but a customized modern musical instrument. Designed to hang from the shoulders of the percussionist, it allows for a much larger metallic surface to cover the torso—and liberates both hands to clutch the various implements used to conjure the genre’s complex polyrhythms. Though now sometimes adopted by others, the rubboard vest was invented by and first popularized among zydeco players. With this tool, they defined the gritty, chank-a-chank rhythms that are as fundamental to this music as the reedy chords and funky riffs coming from the accordion.

These days a typical zydeco band comprises five pieces—electric guitar, bass, and drums in addition to the seminal instruments, accordion and rubboard. The songs draw from a traditional repertoire informed by blues, ballads, shuffles, and waltzes, now also infused with a gumbo of other, postmodern influences. The vocalizing may be in English or French, though the latter grows less common with each generation of players. But this music has one priority far more compelling than linguistics or lyrics: It makes you want to dance.

Adapted from the introduction to Texas Zydeco, by Roger Wood, photography by James Fraher, University of Texas Press. 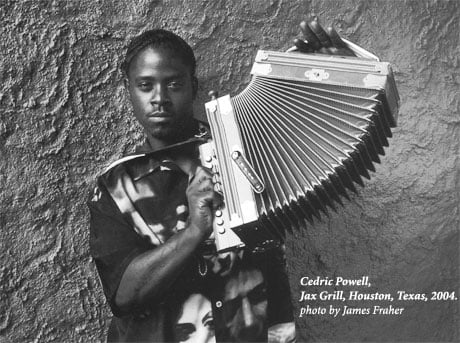