Enrique’s Journey: The Story of a Boy’s Dangerous Odyssey to Reunite with his Mother

The subtitle says it all: On the morning of March 2, 2000, a Honduran teen-ager named Enrique steps outside his grandmother’s house in the slums of Tegucigalpa. Carrying little more than the clothes on his back and a piece of paper with a phone number in North Carolina, he heads north to find his mother. After 122 days and thousands of miles—walking, hitchhiking, riding Central American buses and clinging to the tops of Mexican freight trains ruled by a lair of gangsters—after confrontations with corrupt cops and la migra, Mexican migrant police; after being deported several times across the Mexican border back to Guatemala; after being repeatedly robbed; after surviving a near fatal attack that leaves him battered, bloody, and naked except for his underwear; on his eighth attempt, Enrique finally reaches the Promised Land. He crosses into Laredo and travels on to North Carolina and Lourdes—the mother he has not seen since he was 5 years old.

Every year an estimated 48,000 children from Mexico and Central America enter the United States illegally and alone. Inevitably some come to work, but most are also searching for a parent who had migrated years before, more often than not, their mother. It was the stories of these women—single moms who depart for the United States thinking they will work for a year or two, save money, and return to their families— that most intrigued Nazario as she began researching what would become a two-year project. The project produced a six-part series that ran in the Los Angeles Times in the fall of 2002 and won the Pulitzer and a host of other prizes for Nazario and photographer Don Bartletti the following spring. Now, Nazario has expanded the series into a book, which in turn will become an HBO movie. “Perhaps by looking at one immigrant,” she writes, “his strength, his courage, his flaws—his humanity might help illuminate what too often has been a black-and-white discussion.” 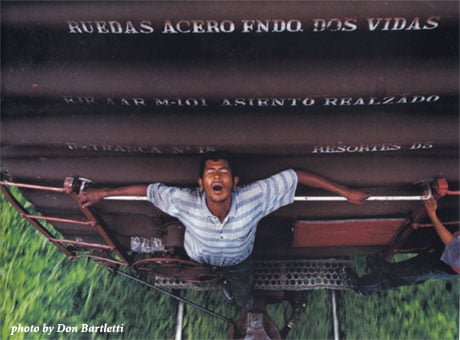 Originally the idea was to find a young migrant and follow him through the entire journey from Central America. Months of legwork and conversations with young immigrants, convinced her that goal was “just shy of nutty.” Instead she would look for someone who had made it as far as northern Mexico, interview him extensively about his trip, and then retrace his journey through Central America, Mexico, and the United States.

She found Enrique in Nuevo Laredo, trying to earn enough money to buy a phone card so he could call the one number he remembered in Honduras to ask for his mother’s phone number. (Both the piece of paper and the pants with the number written on the waistband were stolen during his travels). At 17, Enrique was older than the “typical” 15-year-old child migrant, but his story was similar to those that Navario had heard from talking to dozens of children in shelters. After his mother left for the United States, Enrique and his sister, Belky, were split up among family members. (Meanwhile, Lourdes was stiffed by her smuggler when she got to the Los Angeles bus station—the first of several scams to which she would fall prey.) As the years went by and her children grew, occasionally Lourdes was able to send money and gifts; Belky did well in school and enrolled in a university with the help of her mother. But Enrique had problems and was shuffled from one family member to another as he grew older. Even when things begin to look up, they never work out. An uncle who seemed to take an interest in Enrique was shot to death. By this time Lourdes had been away for nine years and had saved a total of $700 to bring her children to the United States. Instead, she sent the money to Honduras for funerals.

Increasingly troubled, Enrique frequents a neighborhood called Infiernito, little hell, controlled by the Mara Salvatrucha street gang. He sniffs glue and dabbles in drugs. Feeling lost and abandoned, he clings to his girlfriend. He wants her to become pregnant, believing that way she won’t abandon him. But even more fiercely, he clings to his memories of Lourdes; endless memories of Lourdes. If he can somehow find his mother, he is sure that life will be better. When he finally gets to Nuevo Laredo on that eighth attempt, he has his chest tattooed: “EnriqueLourdes.” Unfortunately, he has romanticized Lourdes so much that reality can never match up to his expectations. “The Odyssey,” writes Nazario, ” an epic poem about a hero’s journey home from war, ends with reunion and peace. The Grapes of Wrath, the classic novel about the Dust Bowl and the migration of Oklahoma farmers to California ends with death and a glimmer of renewed life.” Enrique’s journey “is more complex and less dramatic.”

To retrace his story, Nazario rode the same buses and freight trains Enrique did, and hitchhiked across northern Mexico, just as he did. Her narrative blends Enrique’s story, scrupulously corroborated (she finds the doctor who treated him after his near fatal beating, as well as the man who drove him to the hospital), with her own observations. Nazario discovers, for example, that what Enrique has told her about Chiapas is all too true. The southern Mexican state is a special kind of hell referred to as “the Beast.” (The freight train is el tren de la muerte, the death train, because of the number of migrants who lose their lives or are killed trying to board or get off.)

While riding through the most dangerous parts of the journey, Nazario was accompanied by what she describes as “an armed Mexican migrant rights group, Grupo Beta.” Untangling the mix of cops, gangsters, bandits, madrinas or freelance cops, who appear throughout the book can be confusing. Grupo Beta is indeed an official organization charged with assisting migrants and curbing the abuse posed by other cops as well as gangs. But as Nazario makes clear, that protection was limited; the journey clearly took its toll:

For months, as I traveled in Enrique’s footsteps, I lived with the near-constant danger of being beaten, robbed, or raped. Once, as I rode on top of a fuel car on a rainy night with lightning, a tree branch hit me squarely in the face. It sent me sprawling backward. I was able to grab a guardrail and keep from stumbling off the top of the train. On that same ride, I later learned, a child had been plucked off the fuel tanker car behind mine by a branch. His train companions did not know if he was dead or alive.

Four of five migrants who arrive at the Albergue Belén shelter in Tapachula have already been robbed, beaten or extorted by the police, says the shelter priest, Flor Maria Rigioni. At the Tapachula train station, fights break out between municipal and state police officers over who gets to rob a group of migrants. Migrants describe being locked up by police until a relative in the United States can wire the kidnapper’s fee and buy their freedom.

There are also amazing acts of kindness along the way. In Tapachula, on the Mexican-Guatemalan border, Olga Sánchez Martínez, a middle-aged woman, has organized a shelter for migrants injured by the train. In a rural hamlet in the state of Veracruz, María Luisa Mora Martín, “more than a hundred years old, who was reduced to eating the bark of her plantain tree during the Mexican revolution,” fills bags with tortillas, beans, and salsa so that her 70-year-old daughter can throw them up to the migrants as the freight train passes by. Baltasar Breniz Avil, whose two sons walked through the desert and now wash cars in California, does the same. “When I help someone here, I feel like I’m giving food to my children,” he says. “I bet people help them too.” As brilliant as the book is, Enrique’s Journey is not without its flaws. Before the Times series was published, it went through 12 drafts. The book, we can assume, received far less attention. The kind of repetition necessary for a newspaper series, where there are no guarantees that a reader on one day has actually read the previous stories, unfortunately makes its ways into the book, detracting from the narrative. Nazario’s final chapter, which zips through a mountain of statistics and studies, reads as if it were tacked on at the last minute. More importantly, though, is a lack of context. The larger political and economic picture goes ignored, except for an occasional detail. We learn, for example, that Enrique’s uncle’s profession—he was a money-changer—became extremely lucrative a result of the U.S. sponsored contras.

But perhaps that is asking too much of Nazario. She has already strapped herself onto the death train to bring us the big picture. All we need is to read about the migrant who has tried 27 times to enter the United States. And look closely at Don Bartletti’s photograph of a young migrant, his arms stretched across the back of a freight car. “Santo Antonio Gamay, hoping to make it to Toronto, shows the fatigue and tension from fifteen hours of riding a train. He has been arrested and deported three times before. In minutes, he will jump off to again try to outrun law enforcement officers.”