Winning the Next War at the Multiplex

Winning the Next War at the Multiplex

hen the Department of Education secretly paid a pundit, Armstrong Williams, $240,000 to shill for No Child Left Behind, it was not the first time that the United States government engaged in covert domestic propaganda. For more than 50 years, the Department of Defense has been examining and altering movie scripts prior to production. As early as 1927, Wings, the first movie to win an Oscar, was filmed at San Antonio’s Fort Sam Houston using government planes and pilots. Though it can shave millions off production costs, the price of cooperation with the military is artistic independence. Since the First Amendment guarantees filmmakers—like painters and poets—the right to pursue their art without official approval, the Pentagon lacks legal authority to censor cinema. However, its representatives can be persuasive. The armed forces of the United States need not storm a Hollywood studio in order to get their way; they can merely withhold permission to use tanks, planes, ships, and troops. When producer Jerry Bruckheimer wanted to adapt Black Hawk Down, Mark Bowden’s account of a disastrous mission in Mogadishu, he needed to appease the only source of Black Hawk helicopters, the U.S. Army. Bowden’s book recounts the heroism of Ranger Specialist John Stebbins. In addition to a Silver Star, Stebbins later received 30 years in military prison for raping a 12-year-old boy. In order to avoid institutional embarrassment, the army insisted that, as a price for borrowing Black Hawks, the name Stebbins be airbrushed out of the story. The character, played by Ewan McGregor, still appears in the movie, renamed Danny Grimes. For the Pentagon, authenticity was less important than public image; for Hollywood, access to a chopper trumped the truth. 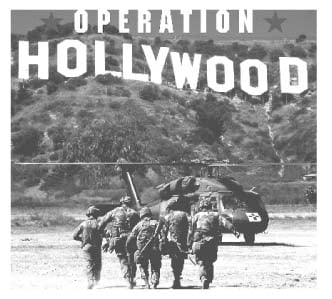 If Don DeLillo writes about the Cuban Missile Crisis, he need show his manuscript to no one but his publisher. But when Peter Almond began producing Thirteen Days, he sought airplanes from the Pentagon. Previewing the script, Phil Strub, head of the Department of Defense’s film liaison office, disliked the characterization of General Curtis LeMay as “unintelligent and bellicose,” though historical transcripts demonstrate that the Air Force general was indeed unintelligent and bellicose. (LeMay, who ran as George Wallace’s running mate in 1968, is often credited with the phrase “We should bomb Vietnam back into the Stone Age.”) Strub also insisted that the film delete a scene in which a U2 pilot is shot down over Cuba, though it did happen. Because Almond refused to alter the script to suit Strub, he had to find planes on his own in the Philippines. The Pentagon is not the only government agency that maintains an office to promote its interests with the motion picture industry. The CIA, FBI, Secret Service, and State Department do as well. Yet, without any missiles or aircraft carriers, they lack the clout of the DOD. It is not obligatory to obtain Richard Armitage’s actual briefcase in order to dramatize life within Old Foggy Bottom. Cooperation from the IRS is not essential to a film about tax collection, though producers might wish to be wary of an audit.