On June 12, 2000, a young man with a gun boarded a bus in a fairly prosperous district of Rio de Janeiro, not far from the Botanical Gardens, where massive palm trees, delicate orchids, and a solarium devoted to insect-eating plants provide a respite from the burdens of everyday life in a city of eight million people.

Making no specific demands at first (later he would begin talking about a rifle and a grenade), 21-year-old Sandro do Nascimento decided to hijack the bus and hold the passengers hostage. To some, it seemed like a routine shakedown in a city where bus robberies are not unheard of. “Look, I’ll be late,” one young woman told her boyfriend as she chatted with him on her cell phone. “Don’t worry. I’m in a hold-up.”

But there was nothing routine about it. Sandro Nascimento had hijacked a city bus in an area where that sort of thing was not supposed to happen, especially not in the daytime. The Jardim Botánico district, named for the Botanical Gardens, is not only fairly prosperous, it’s also well transited. Bus 174 passes a prestigious university, where several of the hostages were headed that afternoon. The neighborhood is also home to the headquarters of Globo, one of the world’s media giants. Since the police had failed to secure the area before the television cameras arrived, the media gained unprecedented access to what was happening in its own back yard. TV Globo alone had four cameras filming the bus from virtually every possible angle, allowing millions across the country to watch the live broadcast of Sandro (who appeared to be on drugs) flailing his arms, waving a gun out the window, and shouting, variously: “This ain’t no fucking movie!” ;”Stare at my face! Take a good look! You can film me so that the whole country can watch!” ;”You think this is a fucking movie? This ain’t no fucking movie. I’m going to blow her head up.”

The drama went on for hours, punctuated with signs of hope and twists in plot. Several hostages were allowed to leave the bus (“You’re a student; you’re probably late, Sandro reportedly told one hostage.) A woman with a gun pointed at her head began to wrote in lipstick on the windshield: “He’s going to kill us all.” As the afternoon wore on, Sandro grabbed another woman and marched her up and down the aisle. He fired his gun and it appeared that someone had been shot. Several hostages stood at the window, screaming at and pleading with the cops standing on the street right below them. Police could also be seen huddled on the side, throwing flashing signals like football players. (They had no walkie talkies, one later explained.)

The fact that the hijacking was being transmitted live clearly influenced what was happening. Everyone was playing to the camera. Sandro had shot into the floor, for example, and ordered the hostages to cry and say that he had shot a woman hostage. The cameras also influenced the various police forces involved—both the much-criticized “regular” police force and an elite SWAT team that prided itself on never having lost a hostage. And they certainly influenced the governor of the state, who phoned in his orders to a commander at the scene (the governor didn’t want anyone killed on television in the middle of the day).

Finally, as night fell, Sandro emerged from the bus with a female hostage. Suddenly shots rang out. When the firing stopped, 20-year-old Geisa Goncalves lay dying. A mob of on-lookers appeared ready to lynch the hijacker. Instead, the police whisked him into the back of a van and proceeded to pounce on him, covering him with their bodies, until he disappeared from the camera’s view. According to the official report, Geisa had been shot once by a police marksman and three times by the hijacker. Sandro died of asphyxiation en route to the hospital. Three policemen were charged with his death; after a brief trial, they were acquitted.

That’s the not-so-brief, and only slightly-annotated version of the context of Bus 174, a film that is brilliant and complex, and as fine an example of testimonial literature as Latin America has ever produced—the language just happens to be film.

Among the millions of people throughout Brazil who watched the live broadcast of the hijacking of Bus 174 was 36-year-old Jose Padilha, the film’s co-director, who lived not far from the area. As he began to read through the volumes of follow-up stories that started to emerge, Padilha realized that there was still a much larger story to be told. Sandro’s life had an almost mythical, tragic dimension to it.

As a young child, Sandro had taken to the streets after seeing his mother stabbed to death by three men. In 1993, he was among the dozens of street kids sleeping in front of the Candelaria Church in downtown Rio, when off-duty police drove by and shot and killed eight of them, wounding many others. Now, he had captured the nation’s attention by hijacking a city bus. How could this have been allowed to happen? Why hadn’t the state done something about Sandro after the Candelaria massacre instead of recycling him through a series of prisons? Along with co-director Fernando Lacerda, Padilha began working on a documentary to try to answer those questions. They hired a private detective and lawyer who helped retrieve nearly 200 pages of court records documenting Sandro’s dismal recycling through the criminal justice system. The result is a stark, exhaustively researched film that combines interviews conducted by the directors with actual TV footage of the hijacking, purchased from the networks after months of negotiation. It reveals a far more complicated picture of what took place that afternoon in June 2000 than was broadcast at the time. 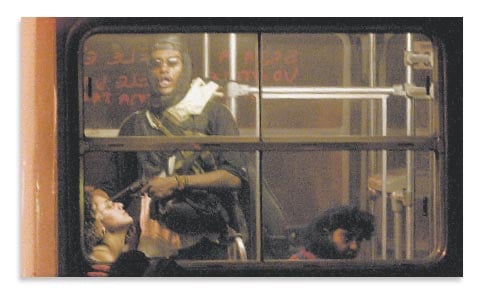 Trained as a physicist, Padilha had a brief, but lucrative career in finance before turning to filmmaking, which may have something to do with the way Bus 174 is structured. There is an almost mathematical elegance to the way it maps the parallel realities—the chronology of the hijacking of June 12, 2000, and the short, sad chronology of Sandro do Nascimento’s life. It moves easily between Sandro the hijacker—”Fifteen years ago, they tore my mother’s head off. I’ve got nothing left to lose. This ain’t no action movie,”—and the young boy who saw his mother stabbed to death. Between “Didn’t you kill my friends at Candelaria! I was there?” and a video of Sandro as a street kid in Candalaria and an interview with a young woman who walks through downtown Rio today and points to the newspaper stand where Sandro used to sleep.

After Candelaria, Sandro moves in an out of the infernal prison system. Just months before the hijacking, he visits a social worker he has known for years. He’d like to get a job, he tells her. But he can’t read or write. He’s never had a job. What could he possibly do? He tells an older woman who has befriended him and provided him a place to stay, that he’s going to make a success of his life and will make her proud. He might not see live to see it, he says cryptically, but she will. Soon after, images of Sandro are televised all over Brazil. But even as he orders hostages around with his gun to their heads, it is clear that he is trapped on the bus, surrounded by police. We’ve seen this movie before and we know how it ends.

Although widely acclaimed at film festivals throughout the world, Bus 174 has been eclipsed by the more commercially popular Cidade De Deus (See, “God’s Little Favela,” April 25, 2003), another film that deals with urban violence and which has been nominated for several Oscars, including Best Director. Critics have tended to group the films together, but Bus 174 is clearly in a class by itself. It can also be maddening at times. Padilha and Lacerda use Sandro and the hijacking as a lens to examine an infinite number of institutions—police, courts, jails, government. The film keeps spiraling outward and we are left with more and more information and more and more questions. And yet it is also, quite simply, one of the finest films to appear in years—one that has much to say, not only about Brazilian institutions, but about the tragic complexity of life itself.

For information about the ongoing Brazilian Film series currently being sponsored by UT-Austin’s Brazil Center and Cine Las Americas, see www.utexas.edu/cola/llilas/centers/brazil or www.cinelasamericas.org.