It’s hard to know whether to be more amused or appalled by this book, as has always been true of Charlie Wilson himself. I’ve always been in the vastly amused camp, understanding that Charlie’s grandstanding was mostly entertaining cover for a shrewd politician. What a tale, what a yarn. Good Time Charlie Wilson of Lufkin, Texas, noted boozer and pussyhound, teams up with a rule-bending CIA agent to secretly funnel hundreds of millions of dollars to the mujahideen of Afghanistan. Over the years, they slowly bleed the Red Army to defeat, ultimately causing the fall of the Soviet Union.

I know it sounds far-fetched–even fantastic–but veteran 60 Minutes producer George Crile has a shitload of evidence. This has to be one of the wildest stories ever told. Wilson, the perennial Peck’s bad boy, first of the Texas Legislature and then of the U.S. Congress, and his CIA sidekick Gust Avrakotos, take on Congress, the CIA, the White House, bureaucrats, arms dealers, and foreign potentates. All the while accompanied by gorgeous babes and all in the interest of killing commies. 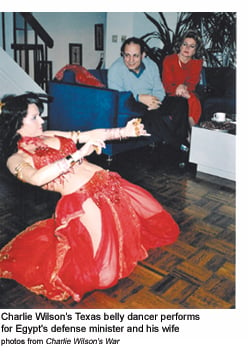 This is history that reads like a cross between a Flashman novel and Tom Clancy. (Harry Flashman is the swaggering hero of the series by George McDonald Fraser, one of Wilson’s favorite writers.) Some of its episodes are so splendidly ludicrous you know they’re true, just because no one could make up this shit. My favorites include the belly dancer from Fort Worth who performed for the Egyptian defense minister and the appropriations chairman who looked like a demented scientist and kept spitting at people. Joanne Herring, the Houston socialite who was also a member of the Minutewomen and a born again Christian–and “roving ambassador” for Pakistan’s Zia ul-Haq–plays a role, as does a bizarre weapons specialist straight out of James Bond. Among this improbable cast of characters is Charlie Schnabel, for many years the Milo Minderbinder of the Texas Senate–the guy who could find, fix, or finagle anything.

In fact, they were all like Milo Minderbinder–Wilson on the appropriations end, Avrakotos in the CIA, the weapons guys–and all of this is more or less held together by Charlie Wilson, who was usually loaded and in the company of Sweetums, Snowflake, or some other lovely. The villains, in addition to the Reds, are cautious bureaucrats, careerists, wusses, lawyers, and other boring grown-ups, who worried about silly stuff like starting World War III.

From Wilson’s perspective, the motley assemblage of warlords who ran the Soviets out of Afghanistan were great warriors and heroes. Wilson claims he once convinced the Afghan fighters that, “Kill the Commie Cocksuckers” was the famous Texas battle cry from the Alamo. His general view of commies was slightly short on nuance: “The only thing those motherfuckers understand is hot lead and cold steel,” he once told me. Charlie always gave great quotes that you could never use in the paper.

Crile is thorough and especially enlightening on the bureaucratic politics inside the CIA and its sociology, the complexities of Afghan tribal rivalries, and the Byzantine labyrinth of the congressional appropriations process. I think his warts-and-all portrait of Wilson is finely done, though I find the mystical-destiny thesis a bit trying. As good Americans, I suppose we should all be horrified that hundreds of millions of our tax dollars (matched by the Saudis) were secretly highjacked by a drunken congressman and an outlaw CIA op, but I defy anyone to read this book and not root for Wilson and Avrakotos.

I rather think all Americans will be amazed to learn how relatively easy it is for foreign policy and huge chunks of tax money to be highjacked by what could, objectively, be considered a collection of complete fruitcakes. It was, after all, the same era in which Ollie North was running around raising money from right-wing zealots to buy choppers for the contras and eventually running completely amok in the Iran/Contra fiasco.

Were it not for one slight “oops,” Charlie and Gust’s Excellent Adventure would probably go down as a quintessential tale of derring-do. As Wilson himself says, “We fucked up the end game.” The spigot of money and arms went on far too long after the Soviet withdrawal. Afghanistan relapsed into warlordism and Islamic militants armed with American weapons took over the country. The mujahideen gave birth to Al Qaeda, in part because, as Crile explains, the astounding victory of Afghan forces over the Soviet Union was taken as a sign that Allah’s jihad was invincible. Allah and the smartest player on the defense appropriations committee: What hath God wrought?

I’d love to leave it as a splendid, rollicking tale–presumably to be followed by the Mel Brooks version of Lawrence of Afghanistan–except we have seen the unintended consequences of CIA adventurism too many times before. Reading Bethine Church’s memoir, A Lifelong Affair: A Passion for People and Politics, reminds me that the grown-ups, like the late Senator Frank Church, who get stuck with the role of sweeping up the mess after the cowboys have cut loose and busted up the saloon, also act out of a patriotism quite as pure as Charlie Wilson’s. They just don’t get to have as much fun. n

Molly Ivins is a former editor of The Texas Observer. Her book with Lou Dubose, Shrub: The Short But Happy Political Life of George W. Bush, is out in paperback. Their next book, Bushwacked: Life in George W. Bush’s America, will be published by Random House in September.