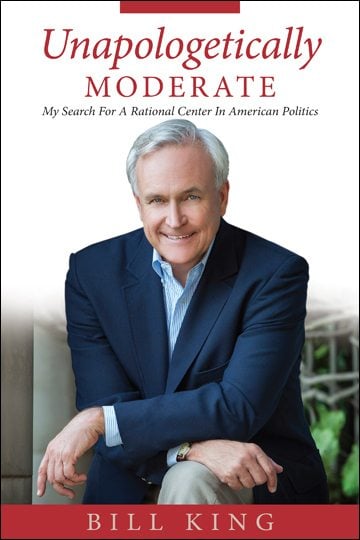 It’s been hard going for moderates lately. The 2014 election cycle was the latest in a long series of culls, as hardline Republicans pushed their more conciliatory colleagues out of office and solidified their ideological hold on Congress. State governments haven’t necessarily fared any better: Texas now finds itself saddled with both national Sen. Ted Cruz (who recently derided net neutrality as “Obamacare for the Internet”—a statement so cynical it transcends mere idiocy) and Lt. Gov.-elect Dan Patrick, a man publicly pushing the idea that ISIS insurgents are sneaking across the Mexican border. The inmates have been running the asylum for a while; it was only a matter of time before they went off their meds.

Bill King argues that this situation is politically untenable and, more to the point, isn’t what people want. His new book, Unapologetically Moderate: My Search for a Rational Center in American Politics, collects a series of columns King wrote during an ongoing stint at the Houston Chronicle. In sections on immigration reform, health care and gun control, King hammers home a few central themes: Our nation is fundamentally centrist; our politics don’t reflect that truth; as a result, policy suffers and voters disengage.

King himself has a background in politics as a two-term mayor of Kemah, and he’s considered a possible contender in the 2015 Houston mayoral election. He’s also something of a wonk, with experience in business (he was president of Southwest Airport Services) and public policy (including a position with the task force that rewrote Houston’s hurricane evacuation plan in the aftermath of Hurricane Rita in 2005).

Reasonableness seems to be King’s guiding principle, and the columns collected in Unapologetically Moderate seldom find him especially fired up on any particular topic. He seems allergic to rhetoric in general, reserving most of his few flourishes for columns on government dysfunction. In “No Place to Call Home,” originally published in 2011, King wrote, “…the great middle of America has time and again served as ballast for our ship of state, keeping her from listing too far to port or starboard. The challenge this time around will be to see if it can keep the ship from splitting apart.”