BOB: Good afternoon, folks! Welcome to our annual coverage of the Writers’ Super Bowl. I’m Bob Arnold, here with my sidekick, Chris Edwards, to bring you coverage of this unusual event. Chris, what can you tell me about our competitor?

CHRIS: Hi, Bob. Hello, ladies and gentlemen. First up is a writer from Austin, Texas.

BOB: Let’s see what kind of background we’ve got on her, Chris. Hmmm. Well, she’s never won anything. Not even a Pulitzer. Not even nominated for a Pulitzer! No bestsellers, either. And she’s 58. But you don’t have to be young to be a writer. In fact, you don’t even have to be sober.

BOB (cheerfully): That’s what years of rejection will do to you, Chris. Also, lack of vitamin D. Writers stay indoors all the time. That’s why she’s so pale.

CHRIS: And, Bob? What about her uniform? Look at what she’s got on. It’s … a dirty sweatsuit. Or something.

BOB: Heh-heh. Chris is new to this competition, folks. He doesn’t realize a dirty sweatsuit is a lot better than a lot of writers wear. Some of them spend the whole day in pajamas. You oughta see what John Updike writes in! You’d never want to read his books again.

CHRIS (in a worried whisper): But, Bob! Have you noticed the … the food stains on her sweats?

BOB: They look fresh to me! She must have changed clothes recently. (clears throat) All right, folks. As you can see-

BOB (laughing indulgently): Writers are never on a team, Chris. These people are loners. Deeply troubled loners. Misanthropes. Who’s ever heard of a team of misanthropes? That’d be like a group of jackals!

BOB (ignoring him): As you can see, the competition has already begun. Watch-

CHRIS: What do you mean, it’s started? Where’s the other team?

BOB (in a whisper, bitterly): God, why do I get stuck with all these college kids? Why don’t they just shoot me? (louder) Well, Chris, you raise a point. Not a very good point, but a point. As our audience knows, writers don’t compete with other writers in the Writers’ Super Bowl-

CHRIS: You mean, they’re not competitive with other writers?

BOB (snapping): Well, of course they’re competitive with other writers. (Muttering) Jesus. What a moron. (Louder) But not overtly so, Chris. As we all know, writers are a passive-aggressive bunch. They snipe, they backbite, they spread rumors. But they’re usually nice to each other’s face.

CHRIS (suspiciously): So, who do they compete against in the Super Bowl?

BOB (heaving a sigh): They compete against themselves, Chris.

CHRIS: Against themselves? That doesn’t sound very … healthy.

CHRIS: So, who wins?

BOB: Nobody. Everybody loses. You know, these rivalries can go on for years, as long as a writer has a career. Or should I say “career”?

CHRIS: Oh, my God, Bob! Look at that! Is she having-a seizure or something? Look at her eyes and mouth-

BOB: It’s just a facial tic, Chris. Highly unattractive and unappetizing, but not dangerous. Most writers get them when they’re writing-

BOB: She hasn’t even started to drool, yet, Chris. It’s early in the creative process. 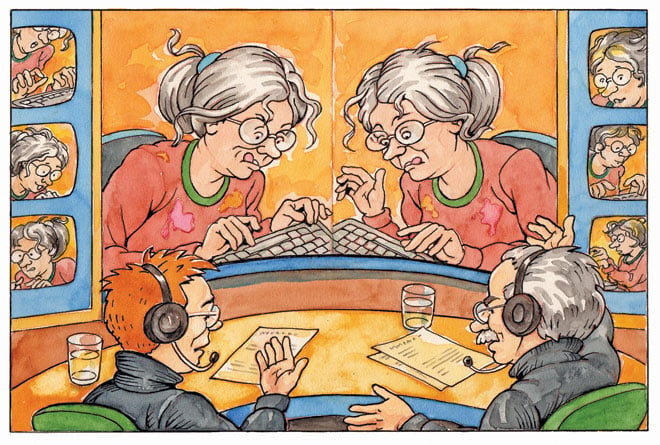 BOB (mildly): Yes, it is. But the audience loves it.

CHRIS (horrified): There’s an audience for this?

CHRIS: But … who are they rooting for?

BOB (wearily): They don’t root for anyone, Chris. Remember what I said? Nobody wins. Everybody loses. That’s what our audience is tuning in to see: failure. Does the word schadenfreude mean anything to you?

CHRIS: Wait! Look, Bob! She’s starting to write. Her fingers are flying. This is … really exciting.

BOB (blasÃ©): Enjoy it while you can, Chris.

CHRIS: No, look! She seems really happy! The words are flowing now! Wow!

CHRIS: God, this is just incredible-to see a writer write! It must be so rewarding to be a creative person! It … (voice trails off). Oh … my … God.

CHRIS (dismally): She’s deleting everything she wrote. Every word. Every punctuation mark.

BOB: Uh-huh. I thought so. And what’s that noise I hear?

CHRIS: Now she’s banging her head on the computer.

BOB (confidently): She’ll be crying soon. They always do.

CHRIS: Jesus. This is violent. It’s getting bloody.

BOB: Just like a real sport. Except it’s all self-inflicted.

BOB: Is she still sitting at her desk?

CHRIS: No. She just got up. Now she’s throwing herself on the floor.

BOB: Ladies and gentleman, that’s the official end of this year’s Writers’ Super Bowl. I think we’ve got ourselves a loser.

Commentator and author Ruth Pennebaker lives in Austin and blogs at www.geezersisters.com.