No Retreat, No Surrender

When No Retreat, No Surrender surfaced, I hoped that Tom DeLay, the former House majority leader, might yet accomplish something constructive-perhaps becoming one of this century’s wicked masters of vituperative, vindictive prose. Imagine my delight on Page 2 when DeLay writes off Che Guevara as “one of the most detestable lizards ever to crawl out from under Leninism’s rock.” No Retreat carries the early promise of an engaging read-but DeLay doesn’t sustain this promise long.

DeLay does lash out, drubbing House Speaker Nancy Pelosi (a socialist in pearls), environmentalist Rachel Carson (“horribly misguided”), Bill Clinton (“slimy”), Travis County District Attorney Ronnie Earle (“political hack”), the U.S. Senate (ineffectual), ex-GOP Majority Leader Dick Armey (“drunk with ambition”), Newt Gingrich (egotistical), and President George W. Bush (“no conservative”). Yet apart from the long-dead Guevara, DeLay attacks in mostly bland, lifeless language unworthy of his bilious spleen. Perhaps the failing comes in pairing DeLay with a co-author who has written such fare as The Faith of George W. Bush. Whatever the cause, DeLay disappoints readers who hoped the pen would be mightier than the Hammer.

DeLay does make charitable remarks about some political figures. These include expired conservative conscience Barry Goldwater, ex-House Speaker Dennis Hastert, Mississippi Gov. Haley Barbour, evangelist James Dobson, and ex-Defense Secretary Donald Rumsfeld. Yet DeLay reserves some of his kindest words for four pals caught up in the corruption investigation of indicted Washington lobbyist Jack Abramoff. These include Abramoff himself and three ex-DeLay aides who succumbed to Abramoff’s siren call: Tony Rudy, Michael Scanlon, and Ed Buckham. Some of these men could still be tempted to rat out DeLay in plea deals with prosecutors. Directed to the Abramoff Four, then, the rallying cry “No Retreat, No Surrender” takes on a whole new meaning.

DeLay’s more immediate legal problems are back home in Texas. Earle is jockeying to try DeLay and three cronies from his Texans for a Republican Majority PAC in Austin for allegedly breaking state election laws to help elect a pro-redistricting GOP majority to the Texas House in 2002. In this case, DeLay takes a different tack, making no mention in the book of his co-defendants John Colyandro, Jim Ellis, and Warren Robold, who also might be tempted to bargain away DeLay in a plea deal.

DeLay’s account of these and other ethics charges is breezy and glib. He says the criminal charges are nothing more than a conspiracy hatched by Earle’s “liberal lords in Washington” to dethrone DeLay under House rules that bar indicted members from leadership posts. With this objective won, DeLay says Earle is afraid to go to court, where the “hack” prosecutor will “get his ass kicked.” 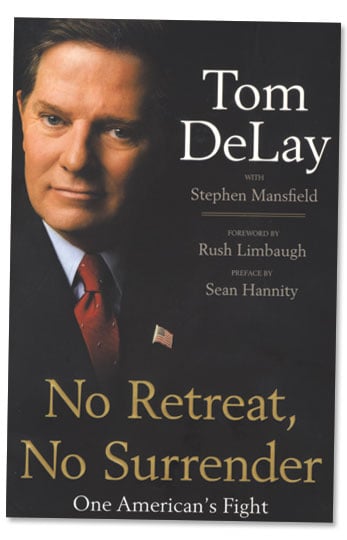 DeLay’s macho title notwithstanding, some passages in No Retreat are written in the voice of a naÃ¯ve or whiny victim. “What I did not expect was a concerted effort to destroy me legally, financially, and personally,” DeLay writes. “I have now spent millions of dollars in lawyers’ fees to answer the lies of the left. I have taken hours away from doing the nation’s business to work through the laborious process of responding to legal charges that my liberal opponents knew were untrue and frivolous when they first filed them. I have watched my family suffer under the burden of not just my political misfortunes-an expected reality in a politician’s family-but of the threat of material destruction, imprisonment, and ruin.”

Delay’s victimization act may seem incongruous because he has previously derived such glee from destroying people high and low. While Bill Clinton’s stupidity and mendacity set the stage for the 1998 impeachment drive, DeLay reveled in his inquistor role. A decade later, when he is a criminal defendant himself, DeLay sets the impeachment record straight. “It wasn’t about politics,” he writes. “It wasn’t about sex. It was about a perjury and the rule of law.”

Not everyone invited a DeLay attack the way Clinton did. The nadir of DeLay’s career came in 2005, when he led the demagoguery surrounding the removal of Terri Schiavo’s feeding tube, which he reviled as “an act of barbarism.” In his book DeLay again cites lofty principle as his guide in the Schiavo case. “My faith teaches me that life is sacred because human beings are made in the image of God,” he explains. Never mind the previous revelation by the Los Angeles Times that DeLay and his family had quietly pulled the plug on his father in 1988, less than a month after a freak accident left the elder DeLay vegetative. No Retreat makes no mention of such politically inexpedient truths.

DeLay portrays his father as an alcoholic who left Tommy to raise himself in a world of scarce love: “My parents were so busy, distracted, or focused on their demons that I was left to learn the ways of the world on my own.”

This loner would go on to become a bug exterminator, wage an unlikely and successful bid for Congress, become the most powerful U.S. majority leader in history, and then resign in disgrace. It’s a heady tale. But DeLay lacks the temperament and personality to tell it accurately and entertainingly.

DeLay’s book traces his lifelong M.O. to a childhood encounter with Cuban B.O. The DeLay family spent the late 1950s in Venezuelan oil towns. Prompted by increasing violence, DeLay writes that his mother decided to take her three children home to Texas on a flight that stopped over in Havana’s airport in late 1959. There, guerrillas in “shabby green uniforms” ordered all Americans off the plane, delaying and frightening them but doing no bodily harm. “I breathed the lifeless odor of fuel on the runway, stagnant there between the broiling tarmac and the relentless Caribbean sun. Worse was the stench of the soldiers. Probably fresh from the dank jungle and wearing their only sets of clothes, these guerrillas emitted a smell that somehow seemed part of their evil, to my 12-year-old senses,” DeLay writes. “Sometimes the scenes fill my mind so powerfully that I can almost smell that tarmac, almost fill my nostrils again with the stench of Castro’s henchmen.” This olfactory scene “has been present every time I faced down some liberal advance, knowing that today’s liberalism is an early stage of the same evil I experienced in Havana.”

One pleasure of reading memoirs of great historical figures is pondering how the course of history can turn on trivial events. It is dizzying to consider what America and the world would be like today, for example, had Castro’s troops enjoyed better access to mass-produced deodorant.

If your own reading of history suggests that liberals such as Nancy Pelosi are taking the nation down a fetid path that can only lead to Leninism or Nazism, then the Hammer’s book has got you nailed. Otherwise, you might conclude that DeLay’s one God-given talent was to arbitrage advantage in the U.S. House of Representatives, that peculiar lobby bazaar where politicians and wealthy interests cut deals at the public’s expense.

Stripped of power, the Hammer finds himself relegated to the sidelines, where he shouts advice on how to nail the opposition. Yet even players on DeLay’s own team view him as a cautionary tale. Despite the DeLay-led redistricting of Texas, Republicans lost valuable ground in the 2006 congressional elections. DeLay’s book suggests that a lack of forceful true-conservative leadership allowed voters to become distracted by the war and ex-Rep. Mark Foley’s lascivious interest in congressional pages. This version overlooks voter disgust with ruling-party corruption-as best personified by Messrs. Abramoff and DeLay.