Revenge of the Rural Republicans

BY JAKE BERNSTEIN AND DAVE MANN

ep. Carter Casteel (R-New Braunfels) stands before her colleagues to offer an amendment that could endanger her political career. “So, I’ve made a decision,” she tells them. “It may send me home.” The Texas Legislature is usually not a place for acts of political bravery, especially of late. Three years ago, a corporate-backed GOP campaign stacked the House with legislators selected, whenever possible, to be radical ideologues pliant to special interests. Republican representatives were defined by their fear of crossing a vengeful leadership ready to marshal lobby money against them if they didn’t cooperate. In 2003, Speaker Tom Craddick (R-Midland) used his new majority to ram through a list of action items coveted by major campaign contributors. But on the evening of May 23, in the 79th Legislature, there in the House chamber, Republican moderates like Casteel did the unthinkable, they followed their conscience and their constituents instead of their speaker. Casteel hoped to amend Senate Bill 422, an innocuous-sounding bill to reauthorize the Texas Education Agency. But tucked inside the reauthorization legislation was one of Craddick’s only priorities for the session: a pilot school voucher plan. Under the proposal, the state would siphon off $600 million in public education money to be given to select students in eight inner-city school districts as “vouchers” for private school attendance. There is no groundswell of demand for vouchers in these areas or anywhere else in Texas—even the state Republican Party has qualms—but that didn’t matter. Delivering a successful vote on vouchers in the House was Craddick’s last unpaid debt from the 2002 campaign. Casteel, who worked as a public school teacher for 17 years, explains why she is offering an amendment that would strip the voucher plan from the bill. The 63-year-old Casteel often presents herself as a proud grandparent. It’s a standard politician’s trope that in her case is boosted by a shock of white hair and a folksy West Texas accent. Yet tonight Casteel is all fire and scalding wit, musing about her role on the floor of the Texas House and whether it’s “to represent someone who visited with me with a lot of influence and power and money” or to “represent the people in my district who called me and wrote to me.” She notes that voucher proponents are circulating an opinion piece that calls for abolishing public schools in favor of private schools. “Today’s public schools have forfeited their right to exist,” wrote David Gelernter, a computer science professor from Yale, in an article that ran in the Austin American-Statesman. “Let’s get rid of them.” “Baloney! Baloney!” Casteel cries in response. “We have a Texas Constitution that says it’s up to us to educate public children—all children and not take money away from the public school system.” 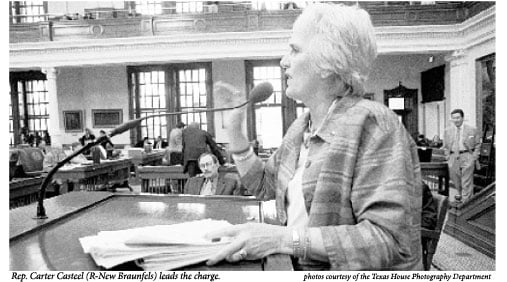 Rep. Bob Griggs (R-North Richland Hills) approaches the back microphone for a friendly question. Griggs is a former principal and school superintendent. In many parts of rural Texas, where schools and prisons are the only economic engines, the school superintendent is one of the most powerful people in the county. As one rural House member, who wishes to remain anonymous, will say after the debate: “I could fuck a goat and my constituents might forgive me, but I could never mess with the public schools in my district.” Griggs cups his hand to his ear. “I’m hearing a noise that resembles that suction sound,” he says. “If I could run a very successful [private] school on a minimum amount of money, it might force me out of retirement, make me a very wealthy man.” Griggs leads Casteel through all the ways private schools receiving public voucher money wouldn’t be accountable. They don’t have to be accredited. They don’t have to comply with class size limits. They don’t have to take state exams. They don’t need certified teachers. (“We’ve made [public schools] so accountable that they can’t go to the bathroom without checking five boxes,” Casteel would later say. “We’re going to give this huge money drain to private schools with no accountability, it doesn’t make sense to me.”) Griggs muses some more about his future private school and how he’d rent a warehouse with a big play area. He’d raid the local McDonald’s for his workforce. “I might put 40, 50, 60 students with this hired babysitter—I mean this aide—that I’m going to hire at minimum wage,” he says. And don’t worry about the parents. “They are going to be very happy at my academy because we are going to win the state championship every year. I am going to spend my money hiring a great coach.” Griggs has little to lose in taunting Craddick and his pro-voucher leadership. The 56-year-old Republican already actively bucked the speaker on a critical school finance vote earlier in the session, and his hostility to vouchers is well known. But other House Republicans, less sure, need only look to the gallery for reminders of how this institution really works. Sitting next to each other are John Colyandro and Brooke Rollins. Colyandro is the research director of the Texas Conservative Coalition Research Institute. He’s also under criminal indictment for his role as executive director of Texans for a Republican Majority, the Tom DeLay-founded PAC that helped coordinate the 2002 GOP campaign. Rollins heads the idea factory for the state’s Republican leadership, the Texas Public Policy Foundation (TPPF). (Earlier in the day, outside the chamber coordinating the pro-voucher lobby campaign was Bill Ceverha—the former treasurer of TRMPAC—who lobbied this session without registering as required by law. Ceverha was recently hit with a $197,000 civil judgment for his role in 2002, which he plans to appeal.) And somewhere in the Capitol complex—in the speaker’s private quarters or sitting with the governor, perhaps—is the grand puppeteer of this pro-voucher push. 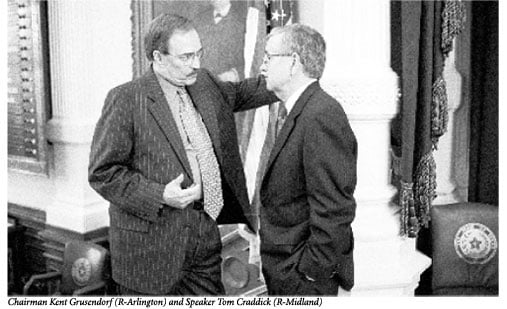