A wave of protests swept across Texas cities this weekend to oppose police brutality and systemic racism, a response in part to the death of George Floyd in Minneapolis last week. Floyd, a 46-year-old Black man and former Houstonite, was killed when a white police officer handcuffed him and pinned him to the ground. A video shows Floyd struggling to breathe as the officer holds his knee to Floyd’s neck for nearly nine minutes. The Hennepin County Medical Examiner and experts hired by Floyd’s family both concluded his death was a homicide, though they differ on what caused it. After the video depicting the death went viral, a chain of massive protests spread across the country.

Police in Austin and Dallas fired tear gas and rubber bullets at crowds of demonstrators, seriously injuring several people and sparking demands that chiefs in both cities to step down. In San Antonio, anti-racism marchers were met by a heavily armed right-wing group at the Alamo as well as police who shot tear gas, pepper spray, and rubber and wooden projectiles at protesters. According to the Houston Chronicle, an estimated 274 people were arrested in Houston on Saturday night alone. The protests and police response to the demonstrations have fueled a growing movement calling for divestment from law enforcement and reinvestment in social services like mental health, addiction treatment, and public housing.

Outside of Texas’ largest cities—in Waco, Odessa, Beaumont, Amarillo, and elsewhere—demonstrators staged protests with little interference. And in Lufkin, a city in a region of Texas with a long, virulent history of racial violence against Black people, more than 100 people attended a Black Lives Matter protest.

Below, you’ll find some of the weekend’s most powerful photos. Protesters demonstrate against police brutality in front of Dallas City Hall on Saturday, May 30. On Sunday, city leaders imposed a 7 p.m. curfew in response to protests on Friday and Saturday. Some demonstrators told the Dallas Morning News that peaceful events turned violent after police used tear gas on crowds. Volunteers pick up broken glass after a night of protests in Dallas. In Houston, where Floyd grew up, police clashed with protestors on Friday, May 29, after a rally. 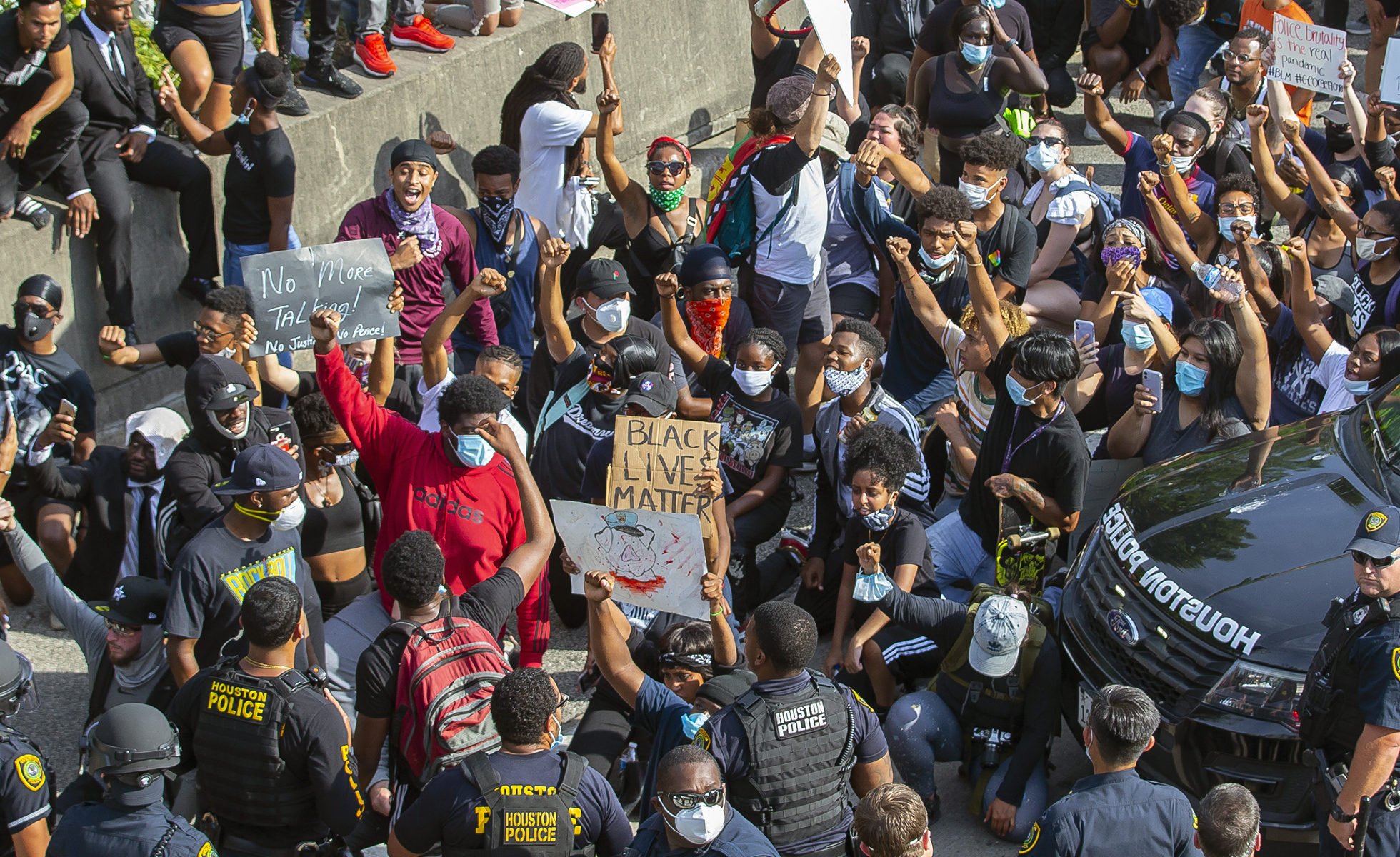 More than 100 people were arrested in Houston on Friday alone. In one widely shared incident captured on a cell phone, a protestor was knocked over by a mounted police officer and trampled on by their horse. On Saturday, May 30, demonstrations remained generally without incident until the evening, when Houston police arrested an estimated 274 people mostly for blocking roadways. No protests were planned for Sunday, May 31; another march for Floyd’s family is planned for Tuesday. Hundreds of demonstrators marched through the streets of Odessa on Sunday, May 31. Demonstrators at a Black Lives Matter protest in Waco took a knee and remained silent for eight minutes in remembrance of the time George Floyd spent pinned to the ground by Minneapolis police officer Derek Chauvin. Chauvin was charged with third-degree murder and second-degree manslaughter on Friday, May 29. A spray painted message is seen on the Alamo Cenotaph—a monument commemorating the Battle of the Alamo—in San Antonio on Friday, May 29, ahead of the weekend protests. Jolene Almendarez
Police guard the Alamo during protests against police brutality prompted by George Floyd's death in May 2020. Jolene Almendarez
Protesters outside the Alamo in San Antonio in early June 2020.

The protests and police response to the demonstrations have fueled a growing movement calling for divestment from law enforcement and reinvestment in social services like mental health, addiction treatment, and public housing. State troopers guard the South Lawn at the Texas Capitol on Sunday, May 31. The Texas African American History Memorial is prominent behind them. Several Confederate monuments also adorn the lawn. Protestors in Austin stopped traffic on I-35 several times over the weekend. Police responded by deploying tear gas and shooting rubber bullets at protestors.

Editor’s note: This post has been updated to better describe Floyd’s death in police custody.

Dallas County Judge Clay Jenkins on Battling COVID-19, and the Governor, as Texas Reopens: “Now we’re just working with this unprecedented state usurpation of local control, trying to keep people safe as best we can.”