Most Recent in Texas Politics:
1The Long Tail of Voter Suppression
2Lulu Seikaly Wants to Flip One of Texas’ Most Conservative Suburban Districts
3Democrats Seek to Undo San Antonio Senate Slip-up
4Trump’s Favorite Texas Sheriff Faces Re-Election Amid a Spike in Deaths at His Jail
5Erika Andiola Says Dreamers Know How to Push Biden
6The Racist History Behind El Paso’s XII Travelers Memorial
Most Recent in Environment:
1One Texas-Sized Loophole is Letting Lone Star Polluters Off the Hook
2Houston, Let People Walk
3Claiming Major Superfund ‘Success,’ Trump EPA Focused on Completing Cleanups, Not Climate Planning
4The Wasteland Underwater
5Running from the Storm
6A Coral Reef Sanctuary in the Gulf of Mexico Could Triple in Size
Most Recent in Border:
15,000 People Contract COVID-19 While In ICE Custody, Including This Father Of 5
2Mexico Turns To Television And Radio For Remote Learning
3New Engineering Report Finds Privately Built Border Wall Will Fail
4El ducto del coronavirus
5The Coronavirus Pipeline
6El Paso Remembered
Most Recent in Criminal Justice:
1I Left My Friends in Prison in a Pandemic. Here’s What It’s Like For Them.
2After the Deaths of Two Soldiers at Fort Hood, the Navajo Nation Wants Answers
3Trump’s Favorite Texas Sheriff Faces Re-Election Amid a Spike in Deaths at His Jail
4Researcher Howard Henderson on Reimagining Policing in the U.S.
5When Asthma in Jail Becomes a Death Sentence
6In Harris County, A Group is Working to Expand Voting Access in Jails
Most Recent in Education:
1Texas Has the Widest Digital Divide in the Nation. What Does that Mean for the School Year?
2The New Ensemble
3Raise a Glass to the Class of COVID-19
4Tough Decisions Ahead for School Leaders in Rural Texas
5‘Almost Akin to a Political Coup’: Houston Teachers Fight Back Against State Takeover of HISD
6The Creature of Martin Creek Lake Won’t Die
Most Recent in Health Care:
1I Left My Friends in Prison in a Pandemic. Here’s What It’s Like For Them.
2Achieving Vision Zero in Houston Isn’t Going To Happen One Intersection at a Time
3State Officials Tried to Cut Women’s Health Care During a Pandemic. It’s a Clear Reflection of Priorities.
4Conception Deception
5Portraits of the Pandemic
6El ducto del coronavirus
Most Recent in The Interview:
1Researcher Howard Henderson on Reimagining Policing in the U.S.
2Texas Observer Founding Editor Ronnie Dugger Reflects on 65 Years of Publication
3How Katharine Hayhoe Stays Hopeful as the Planet Warms
4Author William Lopez on How Immigration Raids Inflict Long-Lasting Trauma
5Why a Texas Gun Control Activist is Optimistic About the Chances for Reform
6American Health Care is Broken, Especially in Texas. What Can We Do About It?
Most Recent in Books:
1Remembering a Jewish Upbringing in Meyerland, Texas
2How Texas Women Delivered the Nineteenth Amendment
3A New Short-Story Collection Imagines a Texas Town’s Secession
4Improbable, Prophetic Houston
5Announcing the 2020 Insider Prize Winners
6‘A Saint From Texas’ Gets the Lone Star State Right
Most Recent in Features:
1Young Texans Keep Spelling Bees Going From Home
2Underwater
3San Antonio Embraces Mandaean Refugees
4The Ghosts of Jefferson
5Little Arthouse on the Prairie
6The Clothes that Make the Man
Most Recent in Essay:
1What the Black Lives Matter Protests Mean for East Texas
2Raise a Glass to the Class of COVID-19
3What’s a Bookstore for?
4Lessons on the Long Game from Goose Island’s Whooping Cranes
5In a Pandemic, Poor Defendants Could Pay With Their Lives
6Loneliness in the Age of Coronavirus
Most Recent in Eye on Texas:
1Eye on Texas: The Black Yearbook
2Eye on Texas: Border Tuner
3Eye on Texas: The Broken Wheel Ranch Project
4Eye on Texas: Spike Johnston
5Eye on Texas: Loren Elliott
6Eye on Texas: Charlotte Moore
Most Recent in Poetry:
1Author Saeed Jones on Empathy, the Power of Memoir, and Growing up Gay in North Texas
2Remembering W.S. Merwin, Honorary Texan
3Lost in Limbo in the Hays County Jail
4Houston Poet Analicia Sotelo’s Debut Smashes Latino Stereotypes
5Parallel Planes
6Options

The Gentrification of Texas

The Gentrification of Texas 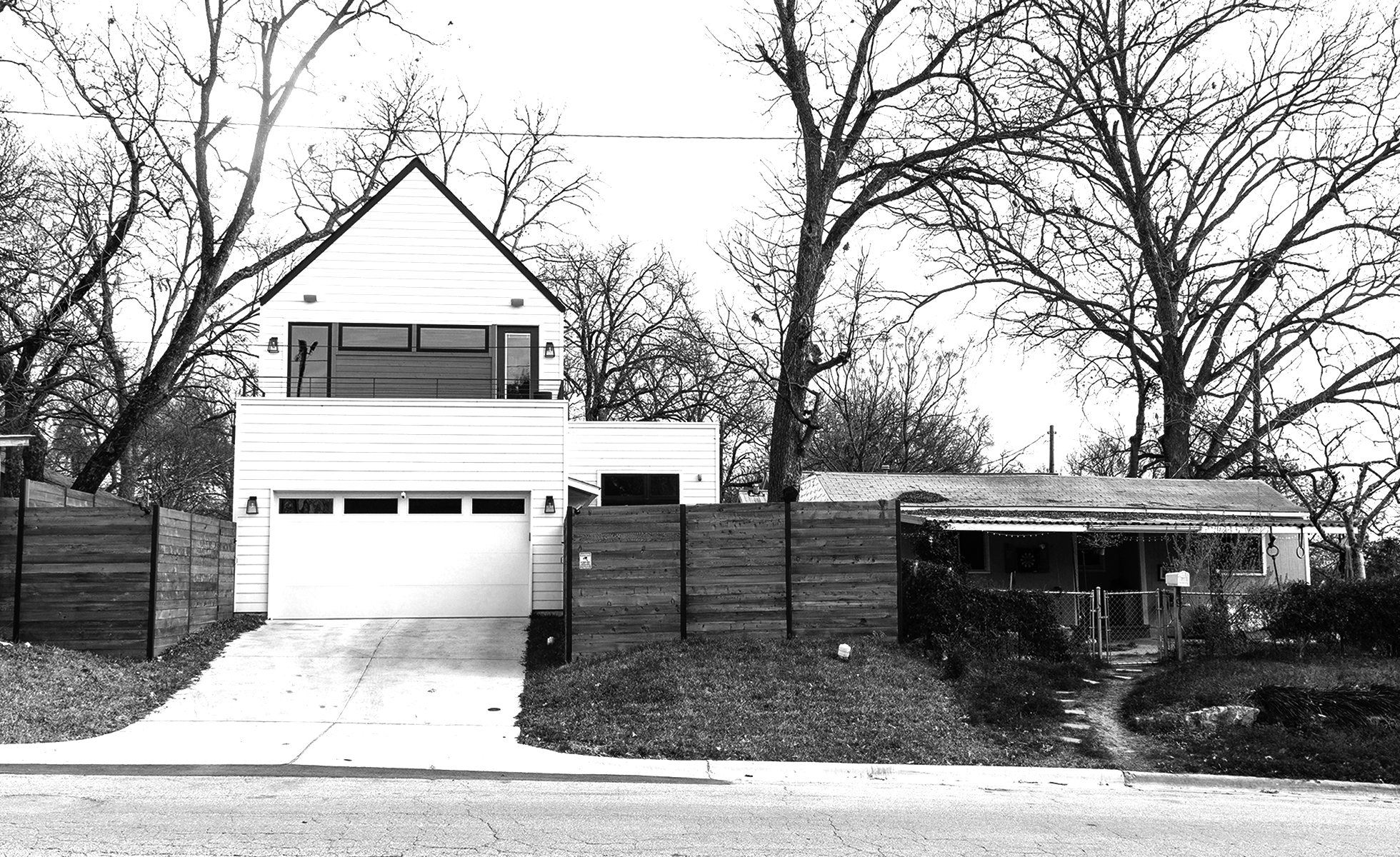 In early 2020, half of Texas adults reported that they were spending too much on housing and that it was difficult to find affordable options in the neighborhoods they want to live in.

1. A Visual Tour of Gentrified Architecture

2. Kicked to the Curb: A Day in the Harris County Eviction Court

5. Stranded in Dallas: How Low-Income Residents are Making do Without Public Transit

The findings, from the Texas Lyceum’s annual poll, shouldn’t have surprised anyone who has been paying rent or property taxes here over the past decade. Since 2010, the median home value in Texas has increased by more than 50 percent, rising from $136,000 to $207,000. In some neighborhoods, like East Austin, the median home value has doubled during the same decade. Housing has long been considered “affordable” if it consumed no more than 30 percent of a family’s income, but we might need to set a new benchmark. By this metric, more than half of Texas renters cannot afford the places they live. Someone earning minimum wage here would have to work 91 hours a week to afford the average one-bedroom apartment.

How has your neighborhood changed? Let us know by filling out this form, or use the hashtag #gentrificationTX on Twitter or Instagram.

The consequences of this are far-reaching. Where you live correlates with nearly every major indicator of health and well-being, from the quality of education you receive to the kind of job you get to the health care your family can access. It determines what you eat, how far you commute, and how much you pay for government services. And yet, while some Texans are afforded the opportunity to make such a consequential decision, an increasing majority are denied that choice, relegated to the fringes of our cities and economies.

Texas’ population is projected to grow by 30 percent—more than 10 million people—by 2040. How we will accommodate that growth is now a fundamental question facing the state. Will our housing policies continue to push low-income and minority Texans to far-flung suburbs to find affordable housing? Will we protect and prioritize our most vulnerable residents as climate change wreaks havoc on our coasts? And will we chain ourselves to the carbon emissions that result from the kind of car-centric sprawl we have relied upon to accommodate growth in decades past?

Our March/April special issue marks the official start of the Observer’s housing beat—and we need your help to keep it going. We launched a Kickstarter campaign with a goal of raising $10,000 to invest in our housing coverage. Your donation will directly support the production of this critical coverage, allowing staff to travel across the state to talk to those struggling with the rising cost of housing. Donate here. —Megan Kimble, senior editor

The Architecture of Gentrification

In East Austin, in Houston’s Freedmen’s Town and Third Ward and Montrose, in Dallas’ Bishop Arts and Oak Cliff, among other gentrifying and -fied neighborhoods, the architectural language (what architects call “vernacular”) has become inseparable from the vocabulary of policy, where other complicated words, like “displacement,” “segregation,” “inequity,” and “NIMBYism,” are warring furiously. Read more.

A Day in the Harris County Eviction Court

Last year, at least 62,548 people faced eviction in Harris County, records show. Despite the number of people affected, there are no recent studies focused on evictions in Texas, said Marcia Johnson, a Texas Southern University law professor. The lack of baseline data makes determining how to prevent evictions a real challenge, she said. For example, Harris County evictions increased dramatically from 55,000 cases filed in 2015 to 76,000 cases in 2016, and then remained higher from 2017 to 2019. No one knows why. Read more.

The Future of Fair Housing in Texas

In 1974, while he was an undergraduate at the University of Texas at Austin, John Henneberger started volunteering with a community group in Clarksville, a former Freedman’s Town near downtown Austin. The neighborhood, which was then still predominantly black, lacked basic infrastructure like sewers and sidewalks, and a proposed crosstown expressway threatened to wipe it out entirely. Until he saw the conditions in Clarksville, Henneberger says, he had always assumed the government treated its citizens equally. He was appalled by the blatantly racist response from local government when community members tried to organize. The Observer spoke with Henneberger, a 2014 MacArthur “genius grant” fellow, about the future of fair housing in an increasingly unaffordable state. Read more.

Texans have seen the cost of housing skyrocket over the past decade. As a result, populations of “at-risk groups”—low-income residents and black and Hispanic families—have declined in city centers and concentrated in outlying suburbs, where housing is cheaper. In January, an analysis by the Federal Reserve Bank of Dallas found that Houston has gentrified faster than any other Texas city, with neighborhoods near downtown seeing spikes in median income as affluent people moved in. But no city is immune. The same thing has happened in Austin and Dallas and, to a lesser extent, San Antonio, where change appears all but inevitable. Cities have largely struggled to protect affordable housing in gentrifying neighborhoods. Once the engine of capital revs up and investors begin to speculate on a plot of land’s future value, the machine is hard to stop. The community land trust model offers an elegant solution: By separating ownership of a house from the land beneath it, you can ensure the home remains affordable—permanently. Read more.

The Alazán-Apache Courts are San Antonio’s largest and oldest public housing development. Built between 1939 and 1942 on the city’s poor and overwhelmingly Hispanic West Side, the courts consist of 685 low-rise apartments split into clusters on either side of Guadalupe Street, less than a mile from downtown. The courts have long been a hub of Mexican American culture, as generations of West Siders have moved in and out of the development, including famed conjunto performers and future scholars. Now the San Antonio Housing Authority plans to wipe the courts, and their history, away. Read more.

The Dallas-Fort Worth metro area, which added more than 100,000 jobs in 2019, leads the nation in job growth and has boomed with new residents and amenities. But some neighborhoods—particularly south side communities like Fair Park, where 1 in 3 households is below the poverty line—have been cut off from that development. Dallas’ paltry public transit system makes it difficult to reach northern and southern suburbs, where new jobs and services have clustered, without a car. Even as their city grows around them, low- and middle-income residents are effectively shut out. Read more.

For years, community organizers in colonias have fought for better drainage, housing improvements, and basic infrastructure. In makeshift homes relegated to the outskirts of cities, colonia residents have long been left to fend for themselves. As climate change intensifies storms and flooding, advocates in colonias are grappling with a particularly acute version of a question that poor communities around the country are facing: how, or whether, to keep rebuilding in a place that won’t stop flooding. Read more / leer en español.

This page will host all of our housing stories from the special issue. Check back for updates.