Most Recent in Texas Politics:
1Rural Voters Stepped on the Gas for Trump Across the Texas Oil Patch
2Local Organizers Explain the Republican Surge in South Texas
3A House Divided
4As Democrats Divebomb, the Texas Legislature Remains as White and Male as Ever
5Texas Democrats Thought 2020 Would Be a Banner Year. Instead, It Was a Catastrophe.
6Millennials and Gen Zers are Breaking Voter Turnout Records in Texas
Most Recent in Environment:
1Texas Has Elected A Climate Change Denier to the Railroad Commission
2Illegal Air Pollution is Skyrocketing in Texas, But State Regulators are Ignoring Complaints
3Why is Michael Bloomberg Giving $2.6 Million to Elect a Railroad Commissioner in Texas?
4One Texas-Sized Loophole is Letting Lone Star Polluters Off the Hook
5Houston, Let People Walk
6Claiming Major Superfund ‘Success,’ Trump EPA Focused on Completing Cleanups, Not Climate Planning
Most Recent in Border:
1Local Organizers Explain the Republican Surge in South Texas
25,000 People Contract COVID-19 While In ICE Custody, Including This Father Of 5
3Mexico Turns To Television And Radio For Remote Learning
4New Engineering Report Finds Privately Built Border Wall Will Fail
5El ducto del coronavirus
6The Coronavirus Pipeline
Most Recent in Criminal Justice:
1Fort Bend County Will Soon Have Its First Black Sheriff Since Reconstruction
2How Texas Jails Avoid Investigations of Inmate Deaths
3I Left My Friends in Prison in a Pandemic. Here’s What It’s Like For Them.
4After the Deaths of Two Soldiers at Fort Hood, the Navajo Nation Wants Answers
5Trump’s Favorite Texas Sheriff Faces Re-Election Amid a Spike in Deaths at His Jail
6Researcher Howard Henderson on Reimagining Policing in the U.S.
Most Recent in Education:
1Efforts to Save What’s Left of Mary Allen Seminary Reveal The Challenges of Preserving Black Placemaking in Texas
2Texas Has the Widest Digital Divide in the Nation. What Does that Mean for the School Year?
3The New Ensemble
4Raise a Glass to the Class of COVID-19
5Tough Decisions Ahead for School Leaders in Rural Texas
6‘Almost Akin to a Political Coup’: Houston Teachers Fight Back Against State Takeover of HISD
Most Recent in Health Care:
1For Families That Lost Loved Ones or Jobs to the Pandemic, Thanksgiving Carries an Extra Weight This Year
2How We Got Here
3A West Texas Nursing Home Sent Its COVID-Positive Residents Elsewhere. Now Two of Them Are Dead.
4The Forgotten Children of Texas
5I Left My Friends in Prison in a Pandemic. Here’s What It’s Like For Them.
6Achieving Vision Zero in Houston Isn’t Going To Happen One Intersection at a Time
Most Recent in The Interview:
1Researcher Howard Henderson on Reimagining Policing in the U.S.
2Texas Observer Founding Editor Ronnie Dugger Reflects on 65 Years of Publication
3How Katharine Hayhoe Stays Hopeful as the Planet Warms
4Author William Lopez on How Immigration Raids Inflict Long-Lasting Trauma
5Why a Texas Gun Control Activist is Optimistic About the Chances for Reform
6American Health Care is Broken, Especially in Texas. What Can We Do About It?
Most Recent in Books:
1Remembering a Jewish Upbringing in Meyerland, Texas
2How Texas Women Delivered the Nineteenth Amendment
3A New Short-Story Collection Imagines a Texas Town’s Secession
4Improbable, Prophetic Houston
5Announcing the 2020 Insider Prize Winners
6‘A Saint From Texas’ Gets the Lone Star State Right
Most Recent in Features:
1How to Die in Texas
2Young Texans Keep Spelling Bees Going From Home
3Underwater
4San Antonio Embraces Mandaean Refugees
5The Ghosts of Jefferson
6Little Arthouse on the Prairie
Most Recent in Essay:
1What the Black Lives Matter Protests Mean for East Texas
2Raise a Glass to the Class of COVID-19
3What’s a Bookstore for?
4Lessons on the Long Game from Goose Island’s Whooping Cranes
5In a Pandemic, Poor Defendants Could Pay With Their Lives
6Loneliness in the Age of Coronavirus
Most Recent in Eye on Texas:
1Eye on Texas: The Essential Women of Austin
2Eye on Texas: The Black Yearbook
3Eye on Texas: Border Tuner
4Eye on Texas: The Broken Wheel Ranch Project
5Eye on Texas: Spike Johnston
6Eye on Texas: Loren Elliott
Most Recent in Poetry:
1Author Saeed Jones on Empathy, the Power of Memoir, and Growing up Gay in North Texas
2Remembering W.S. Merwin, Honorary Texan
3Lost in Limbo in the Hays County Jail
4Houston Poet Analicia Sotelo’s Debut Smashes Latino Stereotypes
5Parallel Planes
6Options

State troopers and local police surrounded the 'White Lives Matter Too' demonstrators, who were outnumbered by hundreds of counter-protestors.

State troopers and local police surrounded the 'White Lives Matter Too' demonstrators, who were outnumbered by hundreds of counter-protestors.

A crowd of 1,000 gathered on Austin’s Capitol grounds Saturday morning for the unveiling of a long-awaited monument to Texas African-American history. The ceremony occurred simultaneously with a small white supremacist protest that was overwhelmed by a much larger counter-protest.

“This monument is the story of my family,” State Representative Garnet Coleman (D-Houston) told the Observer. “As descendants of slaves, we lost an opportunity when Reconstruction failed, but many Black people did great things anyway… People need to know the full history of Black Texas.”

Black legislators including Helen Giddings (D-Desoto) and Rodney Ellis (D-Houston) pushed for the monument, which was more than 20 years in the making due to funding woes. Its bronze friezes depict the history of Black Texans, from Estevanico de Dorantes, the first African to set foot in Texas, to an image of Bernard Harris Jr., the first African American to walk in space.

As the monument was unveiled, around 15 people affiliated with a group calling itself “White Lives Matter Too” — a local group echoing White Lives Matter, designated a neo-Nazi hate group by the Southern Poverty Law Center — gathered on the east side of the Capitol grounds. A group of about 500 counter-protesters quickly surrounded the group, some of whom carried assault rifles, and the two groups were soon chanting back and forth: “Nazis go home” versus “White lives matter.”

A White Lives Matter protester, who would only identify himself as Wesley, told the Observer the group hadn’t come to protest the Black history monument, claiming they did not know about it when planning the event. “But I do think it’s a double standard,” he said. “If this was a monument to white American contributions, then people would call it racist.”

The unveiling continued despite the interruption, and according to Meme Styles, an activist with the police reform group Measure Austin, the White Lives Matter protest had “no impact” on the monument’s message.

“Most Texans don’t support their ideology anymore,” Styles said. “That’s why you’ve got like six White Lives Matter protesters surrounded by a mass of people shouting them down.”

The white supremacist group was led by Ken Reed, who told the Austin American-Statesman that he was protesting hate crime laws. “We feel that the hate crime law is unfairly and unjustly applied to white folk, white people, as opposed to minorities,” Reed said.

“Personally, I respect everyone’s right to free speech,” said Coleman of Reed’s demonstration. “And I could understand if they wanted to have an economic discussion, but if they think they’re suffering because of race, they need to take another look at history.” 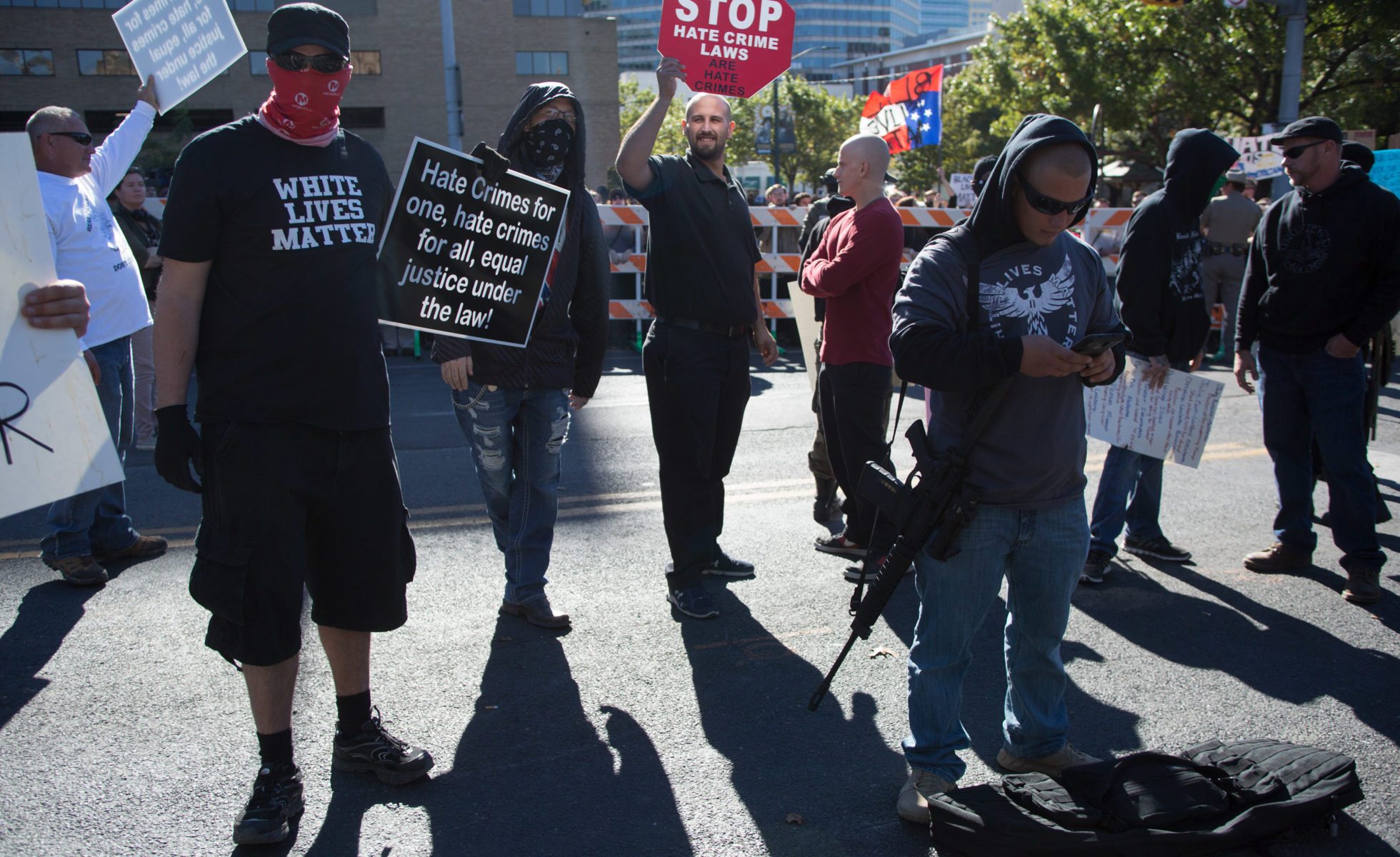 As the monument celebration ended and the crowd cleared, the dual protests continued in the street in front of the Capitol for three more hours. Counter-protesters kept up chants of “Racists go home,” “No Trump, No KKK, no racist USA,” and “Black Lives Matter,” largely drowning out the white supremacist group.

The police presence, including both Austin police officers and state troopers, grew throughout the afternoon, with riot police forming a protective ring around the White Lives Matter protesters and eventually erecting a barricade between the white supremacists and the counter-protesters, who began chanting “Cops and Klan go hand in hand.”

Department of Public Safety Director Steve McCraw, who oversaw the operation, told the Observer that officers “were simply protecting the rights of everyone.”

As the white supremacist group left around 3 p.m., law enforcement officers escorted them back to their cars in the Capitol visitors parking garage. The counter-protesters followed, and one was arrested for allegedly throwing a water bottle.

There, one white supremacist demonstrator armed with an AR-15 pulled an additional clip from a black duffel bag and brandished it before the crowd.

“Don’t worry, it was already loaded,” he told the counter-protesters from the other side of a protective police line. “It’s just in case I need more.”