Critical gestures against industrial food are all the rage these days. Michelle Obama planted a White House garden. Agriculture Secretary Tom Vilsack jackhammered a D.C. sidewalk to grow his own greens. Democratic members of Congress are carrying dog-eared copies of The Omnivore’s Dilemma. Meanwhile, the American gut, oblivious to the posturing, expands to unprecedented proportions. Between 2000 and 2005, the number of Americans with a body mass index over 40 (indicating obesity) rose by 50 percent.

There is no shortage of explanations for our flab, but all the theories promote a common solution: They demand a revamped food system that eschews industrialization and embraces small-scale production. There are thousands of nutrition-related books on the market, but the allure of Hank Cardello’s Stuffed is that he confronts this conventional wisdom head on. Rather than offer a predictable condemnation of industrial food, he portrays the purveyors that have plumped us up as our likeliest saviors. “The real solution must come from the food industry,” he writes. “They hold all the cards.”

The pragmatism underscoring Cardello’s argument is admirable. Industry does hold the cards, and any viable solution to America’s food issues will have to work with, rather than ignore, industry. That said, Cardello, a former executive at Coca-Cola Co. and General Mills Inc., ultimately fails to make a convincing case.

Part of the problem is his thorough job of exposing the insidious tactics of the industry that cranks out our food. Drawing on detailed knowledge of the corporate supply chain, he ably highlights the hidden aspects of the food system that contribute most to our horizontal growth. A chapter on the “purchasing agent”-the person in charge of buying in bulk for restaurants-is a case in point. Taking us deep into the “mechanics of the restaurant business,” Cardello convincingly demonstrates how agents advance their careers, promote the corporate philosophy, and help keep food cheap by buying massive quantities of highly preserved, calorie-stuffed edibles. Until and unless such “cheaper is better” thinking is modified, Cardello argues, “healthier restaurant food will be slow in coming.” 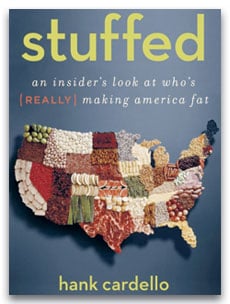 All fine and good. But Cardello ignores a key question: how to get the food industry to prioritize human health over corporate profit? The answer is pivotal to Cardello’s argument. He never provides it. The logical place to look for a solution would be government. But for reasons that are never substantiated, he instinctively rejects governmental participation in a chapter called “Nobody wants to be told what to eat.” As the food system has globalized, Cardello writes, “the role of government took on a parental role.” He disapproves, lamenting a government “that screens our groceries” and dismissing the FDA’s food pyramid (which certainly has its problems) as nothing more than a “paean to Egypt.”

The federal government has ample reason to hang its head over its management of food health and safety. But who else can set Cargill, Kraft Foods, and Archer Daniels Midland, on a path toward healthier food? Cardello, ever the corporate optimist, insists it can be done. Corporations just need to wake up and realize that there’s greater profit to be made in healthy food, he argues. Not only does Cardello fail to document the economics of this claim, he undercuts his thesis of corporate reform in two ways.

First, there’s the consumer, and the consumer, even Cardello suggests, will always prefer unhealthy food. Cardello quotes McDonald’s executives who sincerely wish more customers bought salads instead of Big Macs. But customers don’t. They want more caloric bang for their buck. Cardello never addresses what he identifies as an ingrained consumer preference: We like fatty foods.

Cardello waits until the last 10 pages to reveal this colossally dystopic vision of a healthy diet. Had readers known that fruits and vegetables don’t factor into his plan, they could have put the book down a lot earlier, consulted that paean to Egypt, bypassed the “purchasing agent” by declining to eat out, and watched their waistlines shrink as they ate from a table loaded with food from the bottom of the pyramid. n

Contributing writer and Texas State University history professor James E. McWilliams is the author of the forthcoming Just Food: How Locavores Are Endangering the Future of Food and How We Can Truly Eat Responsibly.