ouston native Rick Bass, born in 1958, is one of the most lauded American writers of his generation, although few of his readers associate him with Texas. His turf is a virgin wilderness located at the top left corner of Montana called the Yaak Valley, and most of his writing during the last decade has come from his deep attachment to that place. Bass is that rare thing: a writer who is equally accomplished at fiction (primarily stories and novellas) and non-fiction (primarily books on the endangered West). His new book is a return to Texas in the form of a slight historical novel, but first a little career examination is in order. Bass hit the ground running in the mid-1980s with an engrossing book of nature essays, Wild to the Heart, and a 120-page reminiscence about hunting in the Hill Country titled The Deer Pasture. The first-person voice in these informally arranged books is unexpected—an artful informality is married to a confidential voice that pulls you in. Two other Bass books published in the ’80s brought him wider acclaim: Oil Notes, a discursive journal of Bass’s observations about time and space and the landscape as he was working as a petroleum geologist in Mississippi, and The Watch, his first collection of short fiction. The only time Bass writes about Houston in depth is in his Kirby and Tricia stories in The Watch. Kirby and Tricia are a young married couple who build a swimming pool deep enough to submerge a Volkswagen in their front yard. The stories are loose and funny and full of drinking and hell-raising—they have a definite autobiographical tone. There is something in Bass that calls for actively engaging life. His belief in activism is implicit even when it appears subversive to the goal of every writer (to get you to read his work). This plea for not reading but doing is from Oil Notes: It dies, here on paper, with type and ink. It is flat, and does not move, this string of sentences, and cannot make you know which instance is true and which is not. Your heart is beating as you read this. You have a pulse. The words on this page are sitting flat on it and are not moving, will not move, even after you close the book. By the end of the ’80s, Bass’s short stories were regularly published in The Paris Review, and he had been acclaimed as an important voice in nature writing by the likes of Edward Abbey, Annie Dillard, and Jim Harrison. Bass’s Mississippi girlfriend Elizabeth Hughes contributed drawings to his early books, and it seemed like a natural step when they married and moved to his dream destination: remotest Montana. 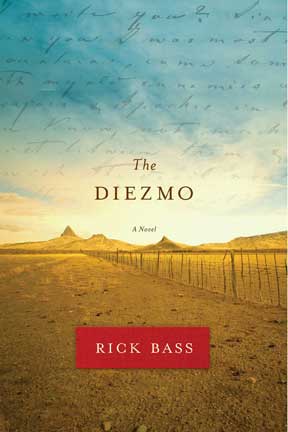 Once he settled down in a log cabin at the edge of the Yaak Wilderness, his work gradually changed. Much of his carefree spirit, however, was still present in his 1991 book Winter, about his first full winter spent on the edge of the wilderness in a cabin with nothing but a chain saw to create fuel for the wood burning stove. At the same time, his descriptions of the regulars at the Dirty Shame bar in the village of Yaak are good comic relief from the unrelenting weather. A turning point was Bass’s 1992 book, The Nine Mile Wolves, that appeared to initiate his deep commitment to keeping his corner of the world wild. The compelling story of a pack of wolf cubs born in Montana (although the mother black wolf came down from Canada), the book touches on the nobility of the animals, the knee-jerk politics of some land owners, and finally his growing obsession with these symbols of the wilderness. This handsome book came from the Clark City Press, obviously a well-funded small outfit in Livingston, Montana. This began a pattern that still holds for Bass’s work—topical, more opinionated books published by smaller environmental presses balanced by his more literary works published by Houghton Mifflin in Boston. Bass is tremendously productive, and by the end of the ’90s he had written close to 20 books, some collections and some that stood on their own. His first full-length novel, Where the Sea Used to Be, combined themes and places from earlier Bass works. In interviews Bass said that the novel, which featured a soulless oilman and his environmentally active daughter, had been in draft form for over 14 years. Described as “baggy” by some reviewers, the long-awaited novel seemed to point out that Bass’s strength was in shorter forms. If you kept up with Bass at all, however, you knew of his growing concern with protecting the Yaak Valley. He papered Washington, D.C., with petitions on behalf of his beloved place and encouraged other Texas literary types to do the same. One of my favorites of his collections, Brown Dog of the Yaak: Essays on Art and Activism (Milkweed Editions, 1999) is a return to the old breathless, excited Bass of his early work. His descriptions of his place, his dog Colter, and his skirmishes with grizzly bears and a huge mountain lion are enthralling and somehow parallel to his political efforts. The new historical novel, The Diezmo, was written, as Bass states, “in the first days of the invasion of Baghdad; for that emotional truth I can claim no evasion or caveat.” The idea appears to have been to present a really spectacular Texas military screwup to parallel the one directed by the current commander-in-chief. To serve his purpose, Bass chose a classic: the misconceived and misbegotten Mier Expedition that resulted in Republic of Texas soldiers drawing the black bean (one in ten soldiers, hence “diezmo”) to be shot by their Mexican captives. The incident is pretty well documented in Texas history and features two unscripted Republic of Texas military men, Thomas Jefferson Green and William S. Fisher. During the week of Christmas, 1842, Fisher and Green, disobeying the leadership of their general, Alexander Somervell, led a scruffy group of Texas volunteers across the Rio Grande to gain riches and extract some kind of vague vengeance upon the Mexican army. Santa Anna was rumored to be living in luxury in Veracruz, but the odds and ends of what was left of the Mexican troops after the Battle of San Jacinto continued to harass the Texans who occupied the territory lying between the Nueces and the Rio Grande. The Republic of Texas had no money for a standing army and Sam Houston weakly opposed engaging the enemy across the river. Fisher is the leader with a dead look in his eye who is set to fight: “We will crush them,” Fisher said. “We will destroy them. We will annihilate them, we will lay waste to everything they ever owned as punishment for having resisted us earlier, when we were moderate. They will wish forever that they had listened to us rather than having opposed us, and when we are done, we will find the treasures they sought to keep hidden.” The narrator that Bass chooses to tell the story is a green recruit from LaGrange, but even he knows that Fisher’s war-like language sounds like empty rhetoric. As things fall apart the storyteller is powerless to leave and then he is one of the Texan captives. Bass is dutiful to the historical record but the fiction has a feeling of reportage, rather than imagination. Bass cannot write a boring book, but in choosing 19th-century Texas and Mexico to write about, he places this novel in the same genre as works such as Edwin Shrake’s Blessed McGill, Cormac McCarthy’s Blood Meridian, Larry McMurtry’s Lonesome Dove, and Stephen Harrigan’s The Gates of the Alamo—books that combine Texas historical elements with fictive power. The Diezmo feels more like an outline of a historical novel that stemmed from an impulse than it does a fully realized effort. This reviewer almost wishes Bass would come back to revisit contemporary Texas in his work. I’d like to know what Kirby and Tricia are up to down in Houston. Dick Holland is a Senior Lecturer at the University of Texas at Austin, teaching classes in the Freshman Seminar program and in Liberal Arts Honors.