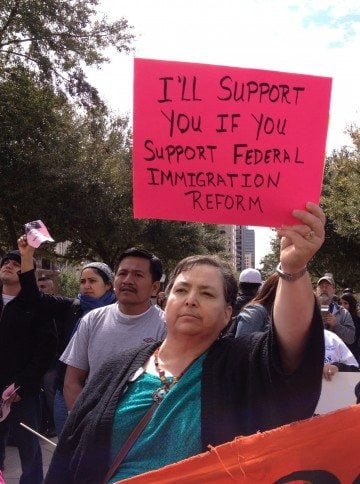 What a difference an election makes. Two years ago, Governor Rick Perry made the ban on sanctuary cities a legislative priority, and state Rep. Debbie Riddle (R-Tomball) even camped outside the clerk’s office to make sure she was the first to file her Arizona-style anti-immigration bills.

Texas lawmakers filed More than 85 immigration bills during the 2011 session. The debate was divisive, even bringing one Democratic legislator to tears on the Texas House floor. It couldn’t be more different this legislative session. Just a handful of immigration bills filed in Texas, and they’ve engendered little.

“It’s like night and day,” says Cristina Parker, spokesperson for the immigration advocacy group Reform Immigration for Texas Alliance, or RITA. “We’re just not seeing much at the state level. All eyes are on federal reform right now.”

Aaron Peña, a Republican who served in the Texas House last session before retiring to become a consultant, says the 2012 election losses and his party’s inability to attract Hispanic voters has a lot to do with the subdued tone on immigration this session. “The harsh rhetoric put a lot of Hispanics off the Republican Party,” he says. “It took the election to bring that home.”

In a state in which Hispanics comprise 38 percent of the population—and growing—Peña says his party needs to adapt or suffer the consequences. Texas’ GOP leadership had tried for years to mute the divisive language among the party’s grassroots activists with little success. With the bruising nationwide losses last November, even Republicans in a stalwart red state like Texas had finally gotten the message, he says. “demographics don’t lie.”

The small number of immigration bills filed have so far been at a standstill at the Texas Capitol. Peña and Parker say they are closely watching House Bill 152, by state Rep. Roberto Alonzo (D-Dallas) which would allow undocumented immigrants to apply for a driver’s license. The bill would undo a 2011 provision that banned undocumented immigrants from receiving a Texas license.

“I consider it a bellwhether,” Peña says. “If the bill passed it would show that views among Republicans in Texas really are changing on immigration.”

The bill, like other immigration legislation, still hasn’t gotten a hearing. Parker says her group, which is an alliance of law enforcement members, business, faith leaders and immigrant advocates, is also closely monitoring HB 2187 by state Rep. Matt Krause (R-Fort Worth) which would expand the federal Secure Communities program to city jails. “If it’s expanded that concerns us,” Parker says. “It would make a terrible situation worse.” In 2010, a report by the New York-based Center for Constitutional Rights and the Benjamin N. Cardozo Law Center, found that jails in Travis and Harris counties had the nation’s highest rate of deporting people for misdemeanors.

With 66 days left in the legislative session, HB 2187 has yet to get a hearing either. “I don’t want to say that we aren’t monitoring the state legislature because we are,” Parker says. “But right now all of our energy and our lobbying is focused on Washington, D.C., and federal immigration reform. That for us is the Holy Grail.”