In lieu of flowers, the Rapoport family has generously requested that donations be made to The Texas Observer, or to the Rapoport Scholars Program at the University of Texas. I came to know Bernard Rapoport when he was chair of the University of Texas System Board of Regents, and I was editor of this publication in the early 1990s. One of our writers was reporting on a story about conflicts of interest within the UT administration. When the university president ignored our requests for what we believed was public information, we did what reporters do. We sent a Texas Public Information Act request letter to each member of the Board of Regents—including board Chair Bernard Rapoport.

B—who passed away late Thursday night in Waco—had been the Observer’s most generous and dependable financial supporter since the 1960s. The University of Texas Board of Regents was the only political appointment he’d ever wanted, and he went at it with the enthusiasm, intelligence and energy he had devoted to American Income Life — the insurance company he and his wife Audre started with a $25,000 investment in 1951…read more. From the Archives: A Tribute to Bernard Rapoport

Journalists, like politicians, are vested with the duty to serve the public interest and have conflicts of interest they should divulge. There is no way the Observer could cover the tribute to Bernard Rapoport in Houston Feb. 26 without a conflict of interest. For 25 years Rapoport’s American Income Life Insurance Co. has been the Observer’s principal advertiser. I’m the owner and publisher of the Observer, and I also have a deeper conflict than that: I regard Barney as one of my closest friends.

I first met him in 1955 when someone—I’ve forgotten who—suggested I go up to Waco and ask him for an ad in the Observer. We met for lunch in a cafeteria. He was in the life insurance business, and I did not want to fly under any false colors with him…read more.

What I like best about The Texas Observer is that it is the most unpolluted institution in Texas. John Dewey once mentioned that one of his favorite quotations was “Every government needs a minister of irritance.” The Texas Observer has fulfilled that need for many years in Texas, and what I hope is that it will continue to do so in the years to come…read more.

Honoring B Rapoport
By Dave Mann

They came by the hundreds to honor and remember Bernard Rapoport on Wednesday.

B, as his friends called him, passed away late last week at age 94. The son of Russian Jewish immigrants, B made his fortune in the insurance business and then set about giving away millions to causes he believed in: the University of Texas, scholarship funds, numerous nonprofits, many Democratic politicians, and the Observer…read more.

B Rapoport’s Legacy
By Dave Mann

Everyone at the Observer was tremendously saddened to learn of the passing late last night of Bernard Rapoport—our board member, great friend and supporter—at age 94.

Of course, he didn’t just support the Observer. It would be impossible to compile a comprehensive list of all the political campaigns and good causes B supported, and all the lives he changed…read more. 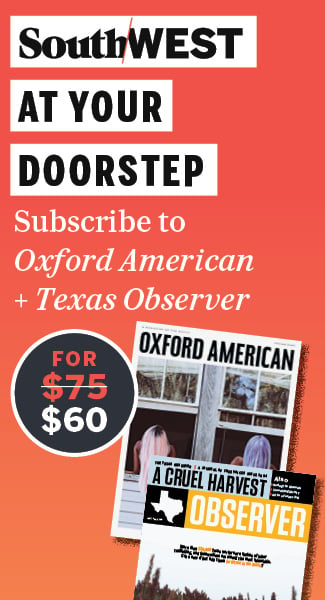